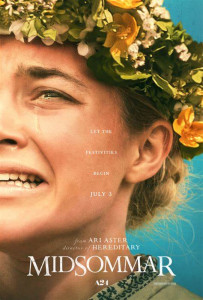 Usually in movies when someone falls off of a building or cliff we rarely see it landing. Sometimes the body sails down and either we are denied a view of it hitting the surface via an intimacy-denying long distance, or we get the opposite, the surprise-shock of a body hurling into the frame, often onto the roof of a car, which explodes beneath the corpse (Die Hard, and numerous imitators).

Not Ari Aster in his follow-up to Hereditary. When a body falls from a great height somewhere in the middle of the narrative, the camera impassively chronicles the descent until the body hits a huge piece of granite and explodes. In a few seconds, just for giggles, we are shown in close up the results of that kiss between flesh and stone. Then another person falls. It's one of the few "horrific" moments in this ostensive horror films.

Mr. Aster is one of three or four breakout horror directors from the past few years, including  David Robert Mitchell (It Follows, Under the Silver Lake), Robert Eggers (The Witch, The Lighthouse), and S. Craig Zahler (Bone Tomahawk, Brawl in Cell Block 99, Dragged Across Concrete). Aster's Hereditary unnerved viewers with its unusual music cues and its twisty and twisted tale of family giving way to a previously hidden "family."  Mr. Eggers impressed specialized viewers with the closely researched and unresolved nature of The Witch, set in early America. Mr. Zahler roams more freely among genres and is fond of hiring icons of conservative filmmaking for his tales of brutal conflict and male soul-searching.

In fact, Mr. Eggers might strike the casual spectator as the more likely director of Midsommar. The story portrays an encounter between an ancient Swedish religious cult and a group of raw Ph. D candidate Millenials one summer in a climate of personal trauma. The language of the cult, often a form of chanting, howling, gesture, and breath exhalation, and the meticulously created locale of buildings, lodgings, and arenas where the cult lives seem more like Eggers material than Aster's gloomy world. Meanwhile, if Mr. Zahler had directed it, Bruce Willis or Kurt Russell would somehow be involved, as either the cult leader or a victim, and Mr. Mitchell would have placed more emphasis on the search for the truth.

The first hour of Midsommar is captivating, and Mr. Aster's control of camera placement, setting, and music creates a promising tension, but anyone who has seen the poster for the film might suspect that we have a Wicker Man type of situation here, and the tension is diluted by our knowledge of horror movie tropes such as the slow reduction of the number of players, and a central character who is destined to be heralded by the clan despite being an outsider (though actually, it is because she is an outsider ... hereditary again, you see).

The first hour introduces Dani Ardor (Florence Pugh), who has just suffered a catastrophic loss (Aster does not trust cars), only to have her boyfriend, the rather obviously named  Christian (Jack Reynor) having to daintily comfort here when in fact he has been trying to break up with her. As she sobs in his lap, he sits like a man trying to pluck dried baby vomit off his pants. His "bros" dislike her and are chagrined when she takes up Christian on his invitation to join the group going to Sweden. All except  Pelle (Vilhelm Blomgren), that is, who has links to the cult, and may be scouting for recruits, like the elderly couple in Rosemary's Baby. The bros are the intentionally repulsive Mark (the recognizable Will Poulter), and Josh  (William Jackson Harper, who once again finds himself far from The Good Place).

Perhaps an hour longer than it needs to be, Midsommar nevertheless shows Aster thinking ahead. For example, that moment of weeping into Christian's lap to his immobile face is rhymed with a later moment when Dani is sobbing and howling from another revelation of loss, but this time, the young women of the commune are with her, holding and circling her, and howling in unison as if to either absorb or ward off her pain.

At root, Midsommar is a story of a woman who doesn't know her partner's friends don't like her, and he doesn't like her so much either, and ends in an extreme manifestation of couple warfare.  In this regard the film is more in line with cultural entities such as the novel The Love Affairs Of Nathaniel P., ' and the New York short story "Cat Person" as granular level examinations and self-examinations of relationship crimes.

Linked to the original Wicker Man with its isolated community with its Druidic rites and Runic charms, but much less misogynistic than the later remake with Nicholas Cage ("No, not the bees. Not the bees!"), still Midsommar is not as "scary" as Hereditary, but nevertheless creates an equal sense of unease with its deliberate pace and its soundtrack full of wind, odd music, chants, and howling babies.

The World of Jazz
Festival Madness

END_OF_DOCUMENT_TOKEN_TO_BE_REPLACED

Words and Pictures
Rose Bond with the Oregon Symphony

Between the Covers
Before Women Had Choice