The Scene That Became Cities: What Burning Man Philosophy Can Teach Us . . . 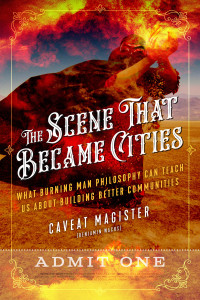 Caveat Magister in conversation by Shawn Levy at Powell's Books 8/8/2019 about his new book "The Scene That Became Cities: What Burning Man Philosophy Can Teach Us . . . "

For those who have and have not been to Burning Man, author Caveat Magister, a longtime writer for Burning Man's blog, answers "why does Burning Man matter?" with interviews with the founders of Burning Man, stories from the playa, and ideas of how to take it back to default reality.

Burning Man has grown and expanded into more parts of the world, going from an experiment performed by two families on a public beach to a frontier carved out of a desert by artists to a culture with global reach produced by people from all walks of life. And now it's entering a "high culture" phase with exhibitions at the Smithsonian's Renwick Gallery and nods from pop culture icons like Katy Perry and industry titans like Google founders Larry Page and Sergey Brin. People aren't just inspired to change their lives during Burning Man. They're trying to build major institutions, bureaucracies, and even decommodified economies on the basis of what they've learned from it, like Burners Without Borders, a group that helps communities rebuild after natural disasters like Hurricane Katrina. This book is designed to make the Burning Man philosophical methodology accessible — a sort of 'how-to' for creating Burning Man-like communities, activities, and events — using stories and examples from the playa, interviews with the founders and significant members of the Burning Man nonprofit, and a dash of self-deprecating humor from an author who frequently writes about this topic. Applied properly, with great consideration for what individual communities and individual people are actually struggling with, Burning Man's philosophy can help readers discover ways to make their "default" world more like what Burning Man has to offer — be it decommodification, radical inclusion, or self-reliance (some of the 10 Principles of Burning Man).

"Burning Man — the annual event in the Nevada desert that has been described as an experiment in community and art — has spawned, if not a philosophy and practice, a worldview and movement." Publishers Weekly

"Deeply personal yet accessible, The Scene That Became Cities is a first of its kind in the genre of Burning Man literature. The wide-ranging, exemplary discussions thoughtfully cover topics from whether Burning Man truly facilitates individual transformations, to its relevance in the political sphere, to how to translate the principle of radical inclusion, to what Burning Man can offer broader society."  Katherine K. Chen, associate professor in the Department of Sociology, The City College of New York

"This wise and insightful book by Caveat Magister, one of Burning Man founder Larry Harvey's muses, takes us on a sublime and illuminating journey that helps explain why the world needs Burning Man and its Ten Principles more than ever."  Chip Conley, author of PEAK: How Great Companies Get Their Mojo from Maslow

Update Required To play the media you will need to either update your browser to a recent version or update your Flash plugin.
Topic tags:
Arts/Culture, Community Building, History
Genre(s):
Spoken Arts