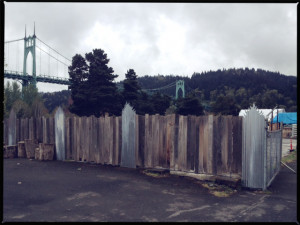 Before European settlers transformed the north reach of the Willamette River, near its confluence with the Columbia, it was a braided river of shallow channels and islands rich in biodiversity. Today the area is designated an industrial sanctuary, but the communities that were displaced or damaged by this so-called sanctuary see it as an industrial sacrifice zone.

On this episode of Locus Focus we talk with Bob Sallinger, Conservation director for Portland Audubon and Mamelang Memela, Climate Justice Program Associate with the Center for Sustainable Economy, about a campaign underway to transform the sacrifice zone created by the Portland Harbor, into a green working waterfront, defined by good jobs, clean energy, and healthy ecosystems.

Bob Sallinger has worked for Portland Audubon since 1992. His current responsibilities include directing Portland Audubon’s conservation policy initiatives, wildlife research initiatives, Backyard Habitat Certification Program, and Wildlife Care Center. He currently serves as board president of Humane Oregon and on the board of the Intertwine Alliance. He previously worked as an adjunct professor of law at Lewis and Clark Law School and as an elected director at East Multnomah Soil and Water Conservation District. He lives in Northeast Portland with his wife Elisabeth Neely, three children and an assortment of dogs, goats, chickens, cat and other critters.

Mamelang is a Portland transplant from Johannesburg, South Africa. A recent graduate of the Lewis & Clark Environmental Studies program she is interested in expanding accessibility of information about the Portland Harbor and its clean up as well as other issues along the Willamette River. She works with the Braided River Campaign and the Portland Harbor Community Coalition.