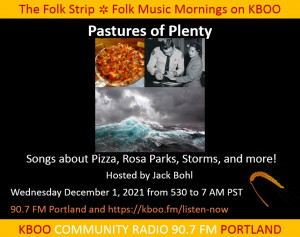 My favorite food is pizza, and I recently had a craving for both pizza and songs about pizza. You'll have to get your own pizza, but there's some fun songs about pizza at the start of this week's Pastures of Plenty.

On December 1, 1955 Rose Parks refused to give up her seat on a Montgomery, AL bus to a white person and with this bold action she became a legend and an inspiration to the 1960s Civil Rights movement. The next set of songs are dedicated to her heroic action.

It was one of the wettest Novembers on record for parts of the Pacific NW, so the middle of the show features some gospel based songs about Storms, songs about floods, and songs about good old Oregon rain.

The show ends with some wonderful songs from new recordings.

Update Required To play the media you will need to either update your browser to a recent version or update your Flash plugin.
Topic tags:
Music
Genre(s):
Folk