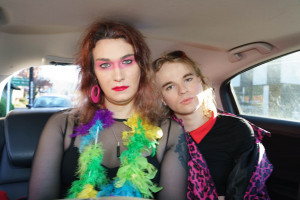 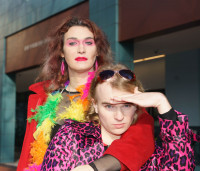 Please join us for Transpositive on Tuesday, March 1st at 6 pm on KBOO for a very special interview with Mikki Gillette and Juliet Mylan on the staging of Mikki Gillette's new play 'The Queers' at the Back Door Theater on Hawthorne beginning March 11th. The Queers represents a milestone in trans representation in Portland theatre, being the first trans ensemble drama written by a trans writer to receive a production of any kind in the area.

Set in a mid-sized city like Portland in 2011, The Queers follows the trans women Lisa (a substitute teacher falsely accused of misconduct at work), Ally (who struggles with poverty and unrequited love), and Andrea (who’s at the very beginning of her transition). Their paths become entangled with Smith and Pim, a young nonbinary couple, and in this witty and daring script, activism, jealousy, financial insecurity, and suicidal ideation all ensue as the pressures of transphobia raises life’s stresses to a fever pitch.

Transpositive is a biweekly program in Portland exploring themes important to those who identify as Transgender, Gender Non-Binary, and Gender Non-Conforming. Transpositive tries to connect listeners with the ongoing activist, arts, culture, and dialogue happening in Portland and beyond. Make your voice heard! Transpositive PDX is open to new and experienced programmers, guests, and events you want our community to know about. We are an open collective. Anyone identify as trans, gender non-binary, gender fluid is welcome to be part of our collective after completing some basic free radio training. For more information contact Emma at transpositivepdx@gmail.com

Update Required To play the media you will need to either update your browser to a recent version or update your Flash plugin.
Download audio file
Topic tags:
Gender, LGBTQ, Arts/Culture