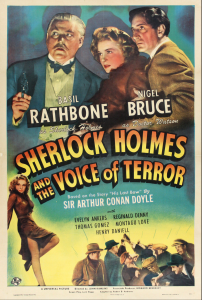 In another very special edition of Film at 11, Lisa Neville, who teaches Film at Cortland University, Cortland New York, Matthew of KBOO's Gremlin Time, join us for a half hour discussion of the film Sherlock Holmes and the Voice of Terror, from 1942. We trace it as a piece of World War II pro-British propaganda, an examination of class structure, the work as an early film noir, and many other facets of its filmmaking, including its contemporary resonances.

One element of the film we couldn't squeeze into our 30 minutes was tribute to the two authors credited with the screenplay. The first one was Lynn Riggs, most famous for writing the source play for the musical Oklahoma and also The Garden of Allah and The Plainsman. He had a short career but it had high water marks. Equally fascinating is the creditors coat end screen writer John Bright. He burst upon the scene with Warner Brothers' The Public Enemy, penned numerous other Warner Bros. social realism thrillers, ghost wrote Mae West's plays and film scripts, and got caught up in the red scare and the attempt to suppress writers by the studios. John Bright gives excellent interviews, and they can be found in anthologies edited bytap Lee Server and Patrick McGilligan.