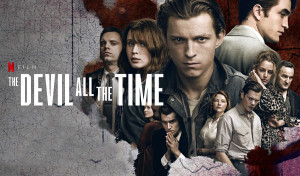 Donald Ray Pollock, discusses his latest novel, "THE DEVIL ALL THE TIME"

Host Jay Thiemeyer speaks with Donald Ray Pollock. If you found the raw depictions of last season's film WINTER BONE transfixing, then listen in as a master of Southern Goth storytelling. Donald Ray Pollock, discusses his latest novel, THE DEVIL ALL THE TIME.

Donald Ray Pollock was born in 1954 and grew up in southern Ohio, in a holler named Knockemstiff. He dropped out of high school at seventeen to work in a meatpacking plant, and then spent thirty-two years employed in a paper mill in Chillicothe, Ohio. He graduated from the MFA program at Ohio State University in 2009, and still lives in Chillicothe with his wife, Patsy. His first book, "Knockemstiff", won the 2009 PEN/Robert Bingham Fellowship. His work has appeared in The New York Times, Third Coast, The Journal, Sou’wester, Chiron Review, River Styx, Boulevard, Folio, Granta, NYTBR, Washington Square, and The Berkeley Fiction Review. "The Devil All the Time" is his first novel.