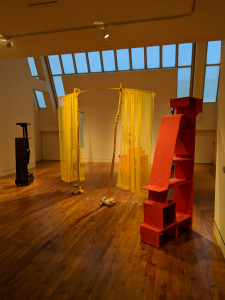 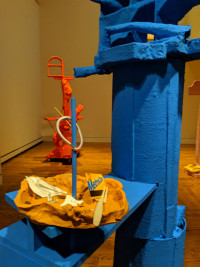 On Tuesday January 9, 2018, Joseph Gallivan interviews Grace Kook-Anderson of the Portland Art Museum about Dawn Cerny’s sculpture show in the APEX series.  Northwest art curator Kook-Anderson talks about Cerny’s brightly colored sculptures and how they resemble furniture and living forms, how they were made, and what is on the cards for the APEX northwestern artists series.

FROM THE PRESS RELEASE:

Dawn Cerny’s works are at once formal and reductive while existing in a realm of the playful and ridiculous. The Seattle artist’s newest sculptures and works on paper resemble familiar forms that suggest furniture and domestic objects occupying our interior spaces. Sculptures created from cardboard, fiberglass, and bright, matte colors exude levity while calling our attention to their form.

In her sculptural work, the objects seductively draw in viewers to contemplate their function, texture, and relation to the human body. Simultaneously, these same works reject the more traditional notions of sculpture and furniture, existing in an awkward place in between. They are gloppy objects that embrace a different kind of abstraction. Amassed within the galleries, their collective presence may evoke the space of a home or independent figures standing together in a room.

Cerny likens her work to Buster Keaton’s slapstick comedy as “an absurdist response to the productive rationalism of modern times—one that both represents and is alienated from everyday life.” Cerny’s work has been exhibited at many venues including Henry Art Gallery in Seattle; Or Gallery in Vancouver, British Columbia; Night Gallery in Los Angeles; and Derek Eller Gallery in New York. This will be her first exhibition in Portland.

APEX is an ongoing series of exhibitions of Northwest-based artists, curated by Grace Kook-Anderson, The Arlene and Harold Schnitzer Curator of Northwest Art.

Joseph Gallivan has been a reporter since 1990. He has covered music for the London Independent, Technology for the New York Post, and arts and culture for the Portland Tribune, where he is currently the Business Reporter. He is the author of two novels, "Oi, Ref!" and "England All Over" which are available on Amazon.com

This show was recorded at KBOO on Dec. 9, 2017 in Studio 1. It was edited by KBOO volunteer Sam Parrish.