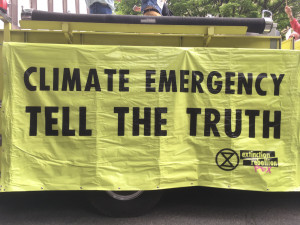 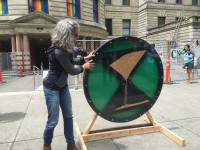 Have you wondered how Zenith Energy got a foothold in Portland to expand a moribund asphalt terminal into the largest tar sands export terminal on the West Coast? An investigative report, to be released on July 15, 2019, by the Center for a Sustainable Economy, reveals that the financial backers of Global Partners,  a major transporter of crude-by-rail, and Zenith Energy Management, Oregon’s largest facilitator of crude oil exports, are heavily invested in Canadian tar sands and Bakken shale oil developments. These investments--and a desire for a strong financial return on them-- are driving a surge in unit train shipments of oil through Portland, and planned expansions at these companies’ terminals in Portland and Port Westward, OR.

On this episode of Locus Focus we talk with Daphne Wysham, Mia Reback and Nick Caleb with the Center for a Sustainable Economy about how these companies and their financiers are active in nurturing political operations to smooth passage of legislation and permits that are facilitating this flow of crude-by-rail through Portland.

Daphne Wysham is founder and director of the Sustainable Energy & Economy Network (SEEN). She has worked for over two decades on research and advocacy at the intersection of climate change, human rights, fossil fuels, international finance, carbon markets and sustainable economies.

Mia Reback is a community organizer in Portland, Oregon and has played a principal role in campaigns to stop the proposed Pembina Propane Export Terminal in Portland, OR and Carty Gas Plants in Morrow County, OR. Mia also worked closely with elected officials and community organizations to develop and support Portland’s resolution opposing new fossil fuel infrastructure, Portland’s Fossil Fuel Terminal Zoning Code Ordinance, and Multnomah County and Portland resolutions to transition to 100% Renewable Energy. She is about to head back east to attend the Yale School of Forestry and Environmental Studies.

Nicholas Caleb is the Staff Attorney for the Climate Justice Program at the Center for Sustainable Economy. In 2014, he worked with the non-profit Our Children’s Trust to develop the legal theories for what would become Juliana v. United States, a youth led lawsuit to establish a Constitutional right to a healthy climate and stable atmosphere. That same year, after a successful grassroots campaign to defeat the Pembina propane export facility at the Port of Portland, he helped design the nation’s first ‘No New Fossil Fuel Infrastructure’ resolution in Portland. And he keeps on fighting on.

This is a chance for us to reiterate to the City that they must deny all permits for Zenith and stop dangerous crude-oil-by-rail.

Update Required To play the media you will need to either update your browser to a recent version or update your Flash plugin.
Download audio file
Topic tags:
Activism, Corporations, Energy/Natural Resources, Environment/Climate, Government/Politics