LNG, Methanol, the Northwest, the World 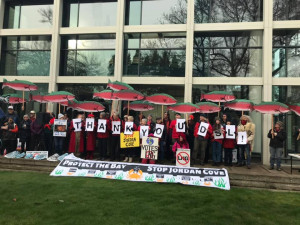 In recent weeks there have been interesting developments with two fracked gas projects in the Northwest. In December the Washington State Department of Ecology (DOE) rejected the Final Supplemental Environmental Impact Statement (FSEIS) that Northwest Innovation Works (NWIW) submitted for their proposed methanol refinery in Kalama. NWIW refused to respond to the concerns that DOE raised and so the department determined that they will conduct the environment impact statement themselves. This is almost exactly what the methanol refinery opponents had wanted. Well, actually they would have preferred if DOE had chosen instead to put an end to the project entirely. But opponents are confident that DOE's study will include the obligatory science that was sorely lacking from NWIW's FSEIS. Then a few weeks ago, in Southern Oregon, the Department of State Lands denied Jordan Cove LNG's umpteenth request for an extension for their removal/fill permit application, stating that the application was woefully inadequate. So Jordan Cove withdrew their application, knowing it was about to be denied.

So what does this all mean for the future of the Northwest? Are these controversial projects about to go away or does the fracked gas industry have other tricks up their sleeve in their quest to turn the Northwest into an export hub for methanol and LNG? On this episode of Locus Focus we talk with two people who have been giving these questions a lot of thought, Dan Serres, with Columbia Riverkeeper and Damon Motz-Storey with Oregon Physicians for Social Responsibility.

Learn more about a new Oregon House Bill 4105, that would tackle some of the biggest threats from new fossil fuel polluters. HB 4105 would prohibit the construction of new, major fossil fuel polluting projects on Oregon’s state lands, and it would implement new safety limits on dangerous oil trains. This link takes you to a form where you can submit comments in support of this bill.