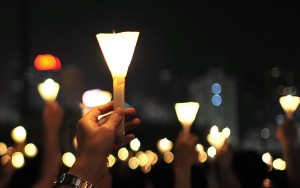 There will be a Candlelight Vision and Vigilance at the Japanese American Historical Plaza​ here in Portland, on Sunday, Dec. 11 from 4 - 5 PM. A stance for solidarity and support against bigotry - and in opposition to the creation of a Muslim registry. It is sponsored by the Portland Japanese American Citizens League (JACL)​, Oregon Nikkei Endowment (ONE), and Japanese American community.

In response to the suggestion that Japanese American incarceration camps are a precedent for the creation of a Muslim registry and in response to the divisive rhetoric and rise in incidents of hate across the country, we invite everyone to join us in taking an unequivocal stand for compassion and justice for all people.

From a community that knows well the danger when fear and prejudice prevail, we stand in solidarity with targeted communities and invite everyone to join in a show of unity and support at this event that will feature diverse community voices, closed with a candlelight vigil.

With a vision united by hope, and vigilance to stand against bigotry, we will strengthen our resolve and commitment to hold our country and our elected officials accountable to uphold our civil rights, civil liberties, and the ideals that our country is founded on.

And In Case You Missed It, interview with Best sellnig Author Richard Reeves about his book "Infamy -The Shocking Story of the Japanese-American Internment in World War II"

Aired on KBOO Community Radio on 6/5/2015 during the Asian and Pacific American Compass public affairs hour.

Bestselling author Richard Reeves provides an authoritative account of the internment of more than 120,000 Japanese-Americans and Japanese aliens during World War II

Less than three months after Japan bombed Pearl Harbor and inflamed the nation, President Roosevelt signed an executive order declaring parts of four western states to be a war zone operating under military rule. The U.S. Army immediately began rounding up thousands of Japanese-Americans, sometimes giving them less than 24 hours to vacate their houses and farms. For the rest of the war, these victims of war hysteria were imprisoned in primitive camps.

In Infamy, the story of this appalling chapter in American history is told more powerfully than ever before. Acclaimed historian Richard Reeves has interviewed survivors, read numerous private letters and memoirs, and combed through archives to deliver a sweeping narrative of this atrocity. Men we usually consider heroes-FDR, Earl Warren, Edward R. Murrow-were in this case villains, but we also learn of many Americans who took great risks to defend the rights of the internees. Most especially, we hear the poignant stories of those who spent years in "war relocation camps," many of whom suffered this terrible injustice with remarkable grace.

Racism, greed, xenophobia, and a thirst for revenge: a dark strand in the American character underlies this story of one of the most shameful episodes in our history. But by recovering the past, Infamy has given voice to those who ultimately helped the nation better understand the true meaning of patriotism.

Here is the ShortDoc that was instrumental in helping make the connections that led to this interview:
"What?! No way . . . "
By Tim Nakayama

The First in a series of Short Radio Documentaries, this episode focuses on the impact of "Order 9066".

Update Required To play the media you will need to either update your browser to a recent version or update your Flash plugin.
Topic tags:
Asian Pacific American, Civil Liberties, Civil Rights/Human Rights, Activism, Community Building