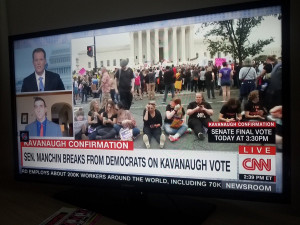 What I wish would happen in response to the Kavanaugh hearing:

...that the prep school, arrogant Kavanaugh types finally get their comeuppance.

...that the women and men who have been holding their shame, guilt and pain are able to let it out, let it go, that we cry out collectively “No more!! Not one more girl, not one more boy, not one more human treated in this way by another!”

...that we finally open our eyes to the brutal violence of this misogynistic system and say, “No More!”

...that the women who have been assaulted over the decades by boys from Georgetown Prep all come forward

...that they point out that this is indeed the culture of that oh-so-exclusive rich boys club for the sons of the wealthy Washington elite. Growing up in the Washington DC area, I have seen boys from Georgetown Prep insulting and pushing a homeless man near Union Station. As a teen, I heard stories of the infamous Georgetown Prep parties where the drunkest girl would become a ‘pass-around girl’ among the boys who would each rape her in turn. I have met some of these arrogant boys – filled with the absolute entitlement that Kavanaugh shouted into the microphone today – so sure that they deserve every single privilege they’ve been given, believing that they somehow came by it through a combination of hard work and pushing through their agenda and not letting anyone stop them - as they ram through anything and anyone perceived to be in their way.

I wish for all the victims of Georgetown Prep boys over the years to step forward now, to show up on the Capitol steps in the morning by the thousands, that they then lead the way for thousands and thousands more who have been victimized by entitled asshole men to pour into the streets, to say “Enough is enough”, to finally put an end to this disgusting culture of men using power and privilege to take what they want and not giving a damn about who they hurt in the process.

And then I wish that this act will embolden more survivors to come forward, that we overthrow all these jerks, from Lindsay Graham to Trump himself, that the many survivors of Trump file criminal charges and he is jailed, that these men finally own up to what they have done.

...that they realize the enormity of their actions and humbly ask forgiveness.

...that the election is annulled and we finally elect a smart, woke woman of color like Cynthia McKinney or Winona LaDuke

...that they win in a landslide and we finally start moving toward actual democracy.

Instead, the more likely outcome is:

...that she is dismissed, not believed, not deemed worthy of consideration by the men in power.

...that they ram through their agenda just like each of these men individually and collectively have done so many times in their lives.

...that the many survivors who felt empowered by her testimony (women’s crisis lines got record numbers of calls as the hearing progressed) retreat back into their shells.

...that the trauma and pain is once again internalized, that the women and men who have suffered in silence, blamed themselves and told themselves that nothing would happen if they spoke up are again silenced into submission.

That this system continues, the sons of the Washington elite celebrate their victory this weekend with a keg party in Georgetown and rape a new group of teen girls with impunity. And that their victims, seeing what happened to Ford, remain silent.