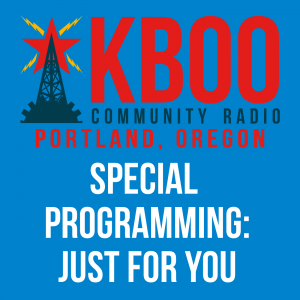 Join KBOO every Tuesday at 7 p.m. throughout the month of February to hear interviews from some of your favorite KBOO programmers!

We'll be diving into the history of Black KBOO, and Black Portland as a whole. We'll cover subjects ranging from gentification, religion, Black media and journalism and much more!

2/9/2021: we hear from Lanita Duke and Nia Gray- Lanita Duke, long time grass roots journalist and currently the host of Let’s talk about Race - an a intergenerational, roundtable discussion of independent national journalists featuring rigorous conversations and analysis of news coverage and the role race plays in politics, government, economy, education, and health.— on KBOO every 2nd and 4th Fridays at 6pm

Later on, we hear an interview with Nia Gray- who happens to be Lanita Duke’s daughter and a community leader in her own right. Nia talked with me about growing up at KBOO, how she’s found her own voice and about her work on the Faith Report and The Woke Church. We’ll also hear some childhood stories and a satire song made by Nia and Lanita in 1992!

Update Required To play the media you will need to either update your browser to a recent version or update your Flash plugin.
Topic tags:
Activism, African American, Movement for Racial Justice, Community Building, Elders, Faith/Religion/Spirituality, Family