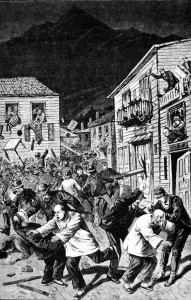 Patricia Kullberg reads from an opinion piece by freelance journalist, Kayla Hui, who argues that the answer to the upswing in anti-Asian violence is not more policing, which only promotes more violence and drives a further wedge between communities of color. “The Answer to Anti-Asian Racism is Not More Policing” was originally published in the online journal Prism Reports, one day before a 21-year-old white male shot and killed 8 people, 6 of whom were Asian women.

END_OF_DOCUMENT_TOKEN_TO_BE_REPLACED

More Talk Radio
There Has To Be A Better Way: Alternatives to Current Police Practices