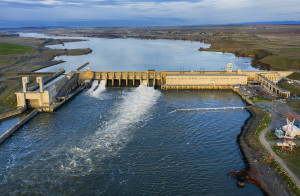 Four hydropower dams, built between 1962 and 1975, have transformed the lower Snake River into slack water reservoirs, deadly to salmon and the 137 other species that are critical to the salmon food chain. After decades of debate and legal challenges over the need to remove these dams, a new comprehensive solution, called the "Columbia Basin fund" is bringing together a wide array of voices in support of breaching these dams and at long last providing a concrete opportunity to save salmon from extinction.

On this episode of Locus Focus we talk with Brett VandenHeuvel, executive director of Columbia Riverkeeper, and Shannon Wheeler, vice chair of the Nez Perce Tribe, about why the Columbia Basin fund proposal is so critical at this moment and what it will take to make it a reality.

Brett VandenHeuvel leads Columbia Riverkeeper’s policy and legal advocacy work. Brett designs and implements creative campaigns, including current work to protect the Pacific Northwest from fracked gas, oil, and coal infrastructure. He is an attorney with expertise in energy facility siting, the Clean Water Act, and land use. His work with Riverkeeper has been featured in numerous publications, including The Daily News, The New York Times, Fox News, and the Lewis & Clark Chronicle.

Shannon Wheeler is the vice chair of the Nez Perce Tribal Executive Committee and a leading voice for the removal of the lower Snake River dams.

You can add your voice to breach the four lower Snake River Dams by clicking here.

Update Required To play the media you will need to either update your browser to a recent version or update your Flash plugin.
Download audio file
Topic tags:
Activism, Economy, Energy/Natural Resources, Environment/Climate, Government/Politics, Indigenous