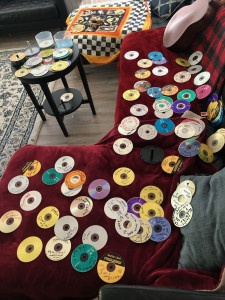 Jimi Haskett, the guitarist, singer and sound producer of the bands The Inputs, Hasketron, Theatre Of Sheep, and John Shirley & The Screaming Geezers, kindly supplied The Wiggle Room with close to three hours of rare, one-of-a-kind sound recordings from his vaults at Hasketron Studios.

This unique collection has never been aired on radio until now.

When Chris Newman of Napalm Beach and Snow Bud & The Flower People and Boo Frog passed recently, it seemed like a good idea to remember his music and also play some of the many musicians from Portland, Oregon that were on the same bill and shared the same stages with Newman at clubs like Urban Noize, The Long Goodbye and Satyricon.

This Wiggle Room features songs from Newman with Napalm Beach and a set from his group Snow Bud And The Flower People.

Here's where you may see and hear Newman performing in the KBOO studios filmed by Mike Lastra:

A celebration of Newman's life & music took place on September 4th, 2021 at the Star Theater in Portland with many bands performing including John Shirley & The Screaming Geezers with Mr. Haskett on guitar. To view and hear Steve Wilkinson and Grant Cumspston perform Newman's song "Crippled Mind" at that memorial, click here:

Local singer/songwriter/harmonica player/collage artist Tom Chandler produced a live Youtube video performance by Billy Kennedy with Pat DeVries titled "The Billy Kennedy Show" on the WillyDodge channel that can be seen at:

Tom Chandler's Phantom Bluff performs songs from their CD "Time Will Tell" plus bonus tracks, following Billy K's set on this edition of The Wiggle Room.

All of Chandler's Phantom Bluff release may be heard here:

Portland musician/artist Spider Moccasin of KBOO's long running program Indian World hosted by John Talley also appears in this progarm in a "Movie For Your Ears" with Spider, Haskett, Tom Hood on guitar, Meagan Moles on vocals among others playing live in the Hasketron Studios, at The Red And Black Cafe, The Oaks Amusement Park, and at Mike Lastra Studios.

This Special also includes tracks from Greg Sage's The Wipers, a deep influence on Nirvana's Kurt Cobian and many more music makers.

Click on these links to see Spider perform "The Race To Win The West" filmed by Stu Hiner live on KBOO:

--and Spider plays "Bring It On Down" filmed by Mike Lastra with Tom Hood aka Tommy Hollywood on guitar, Tom is a longtime KBOO DJ on The Wiggle Room & many other radio shows produced solo and with his Dad Ernie Hood: one of the original founders of KBOO back in 1968.

Coyle & Sharpe also appear from their "Audio Visionaries--Street Pranks & Put-Ons" CD--- there is nobody like Coyle and Sharpe. They are a popular late night staple of lunacy here on KBOO for a long while. C&S are heard here in "Sagrana My Day" an opera from the remote island of Boogravia and "Ashtray On Nose".

NOTE: All of the artists and the videos recommended above plus much more can also be easily found by doing a search for them at the youtube homepage.

This program grew out of love for Portland and its creative people and is dedicated to Chris Newman, John Talley of Indian World on KBOO, Spider Moccasin's Mother Rosella and KBOO's longtime Station Manager Alan Baily. --R.I.P.

Thanks Again to Jimi Haskett/Hasketron Studios for making this show happen.

You can get in touch with your Wiggle Room host Bill Dodge at:

--For questions, suggestions, or to send feedbck to performers on The Wiggle Room--we would love to hear from you!

Update Required To play the media you will need to either update your browser to a recent version or update your Flash plugin.
Genre(s):
Bluegrass, Folk, Rock and Roll

The World of Jazz
Joy Spring

END_OF_DOCUMENT_TOKEN_TO_BE_REPLACED

The World of Jazz
Joy Spring

Wednesday Talk Radio
Mass shooters and their enablers, the demographic shift and the death spiral of white supremacy, with Scot Nakagawa

Transpositive PDX
An Interview with Paisley Currah, author of SEX IS AS SEX DOES