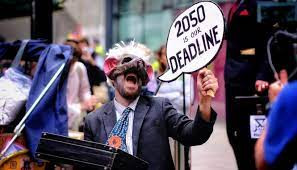 Climate change is accelerating, relentlessly, making human life much less comfortable and indeed, say the climate scientists, threatening to produce the 6th Great Extinction including all the higher apes. As Joe Biden and others said in advance, the 26th annual Conference on Climate Change in Glasgow was “the last best chance to save the planet.”  The Old Mole’s Bill Resnick asks his guest Tina Gerhardt (a climate change researcher and journalist who observed the Glasgow conference): Do we now have a binding agreement with enforcement and a doable plan for stopping global warming. “No” was her answer, far from it. But some small gains were made and the protests outside were uniting around a feasible program.

Update Required To play the media you will need to either update your browser to a recent version or update your Flash plugin.
Download audio file
Topic tags:
Activism, Corporations, Energy/Natural Resources, Environment/Climate

END_OF_DOCUMENT_TOKEN_TO_BE_REPLACED

The Dirtbag
Harvesting figs, pears, and apples; plus curing and storing onions