Port Westward: The Last Hope for a Methanol Refinery in the NW 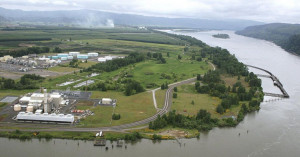 Last June, the long embattled methanol refinery that was proposed for the Port of Kalama, Washington, was finally defeated. Northwest Innovation Works, the Chinese-backed company behind this project, originally proposed to build three of the world's largest methaol refineries in Tacoma, Kalama, and the tiny Port Westward Industrial Park, downstream along the lower Columbia River from Kalama. First the Tacoma project was shot down. Now that the Kalama project is also dead, NWIW's remaining hope is to build its plant at Port Westward. But first they need rezone 830 acres of fertile floodplain for industrial use. And that effort has received much pushback from this rural farming community.

According to Dan Serres, conservation director for Columbia Riverkeeper, “If you’re trying to sell high-value mint and blueberries or protect sensitive habitat for salmon, having a methanol refinery next door is going to be an issue. The farmland, water resources and salmon habitat here are so important for the community. We feel those values are much more consistent with the health of the county and its long-term economic health than adding a flash-in-the-pan fossil fuel terminal and attempting to rescale Port Westward Industrial Park from its already impactful size to that of the Port of Vancouver.”

On this episode of Locus Focus we talk with Dan about why so many farmers and community members up and down the Columbia River are so opposed to this project and what they are doing to stop it.

Update Required To play the media you will need to either update your browser to a recent version or update your Flash plugin.
Download audio file
Topic tags:
Activism, Agriculture, Community Building, Energy/Natural Resources, Environment/Climate, Government/Politics