The Firesign Theatre "Live at the Magic Mushroom", Part 1 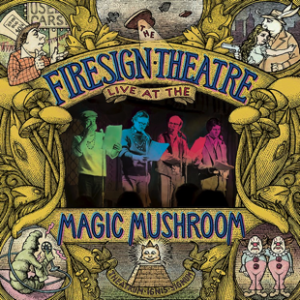 On today's episode, we welcome David Ossman and Philip Proctor of the legendary comedy group the Firesign Theatre, and Firesign archivist Taylor Jessen to talk about their latest release “The Firesign Theatre Live at the Magic Mushroom". And we are truly in three places at once with David joining us from Whidbey Island, Phil and Taylor from Los Angeles, and me here in Portland.

The new release includes a DVD and booklet, collecting all 12 plays from their performances at the Magic Mushroom in Los Angeles from October 1967 through January 1968. These recordings, which have been unavailable for 50 years, mark the Firesign's early days, a period of  intense growth and experimentation. And the shows provided material for several future albums and appearances both on-stage and on the radio.

Our recording session for the interview went over an hour, not surprisingly given David and Phil's marvelous memories, and Taylor providing the historical context on the performances and the Magic Mushroom package. So we'll be playing it all in two installments -- Part 1 on today's show, and Part 2 to follow on the March 10th episode of Jonesy. It was an absolute delight talking with David, Phil, and Taylor! I think you'll feel the same way listening back to the conversation.