The Sweet Life is celebrated via movies today on Film at 11 for Friday, July 1, 2022 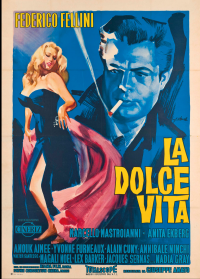 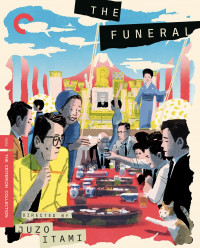 In an international edition, Jeff Godsil celebrates on Fellini's hit La Dolce Vita, while Natalie Lasko in Thailand ponders Happening, the recent French film about abortion based on the novel by Annie Ernaux, and we also share thoughts on the new Criterion release of Juzo Itami's The Funeral.

Our reviewer, Natalie Lasko, writes with some further thoughts:

I have been thinking about my discussion of Happening in relation to the Roe V. Wade hearing in America, and although I am content with what I said in the evaluation that we recorded, I do not feel as though I did justice to the atrocious decision that the supreme court enacted.

At that time I was far too sensitive to the topic of abortion to the point where I avoided addressing the rights of abortion in America. I am concerned that my evaluation of the film, although justified, does not take into account the toll that it takes among the population of women in America. I do not feel that I have addressed how intimate Happening is as a film and adds to the conversation of the utter hell that a woman must deal with when the rights to their body are taken away (as do other films that deal with the matter of abortion, such as Varda’s One Sings, The Other Doesn’t, and some recent American films).

I mentioned during the conversation that this movie was hard to watch. And at the time, I likened it to the sensation of waiting and having no agency to what happens to your body. Well, I feel as though I failed to mention the uncomfortable prevalence of that very sensation that women now feel in America today. There are moments in the film which are far too real that, quite honestly, I had to skip through.

As a woman watching this film, there were times I found a reality that was too hard to bear. And I cried.

And I did not want to think, nor confront, that an action as real as forcing a knitting needle or a coat hanger to pierce the inner core of your body was something that I, including many other women, could possibly and in fact may face in the future.

I now feel that in my review  I approached my commentary with a distance that was insensitive to the crushing reality that now exists for many women in America – including myself.

Jûzô Itami is one of those unusual artists who didn’t enter his prime profession until late in life. George Bernard Shaw started writing plays in his 50s, Mary Wesley began novel writing at 70, and Itami became a movie director in his 50s.

Before that, he was the son of a prominent film director of samurai social commentary features, but Itami avoided following in his footsteps by becoming an actor. He appeared in Nicholas Ray’s 55 Days at Peking.  He went on to become a magazine creator, a TV journalist, and an a director of commercials. His first feature was The Funeral, released in 1984, and now revived by the Criterion Collection in a disc with a modest number of supplements.

The film is the fruit of a lived experience. The year before, he had to arrange the funeral of his father in law, and the arcane rituals of a true Japanese burial service.

Interestingly, the film begins with three variations on domestic life. The first is at the home of the father in law. He returns from a doctor’s appointment, has splurged on avocados and eel, teases, I guess, his wife about finding a young mistress, and then suffers a heart attack. The second is a stylized encounter between a client and a giant geisha using a trompe l'oeil trick to sell a product in a commercial. The third shows the film’s main couple, actors from the commercial, Chizuko (Nobuko Miyamoto)  and  Wabisuke (Tsutomu Yamazaki, who was to star in three more of Itami’s films), as they settle in to a night in which they must tell the two children about their grandfather. After that, the film is as far from quiet domesticity as can be – crowded, febrile, chaotic, like a Welles film, or a Preston Sturges comedy, or even a late Bogdanovich film.

Also appearing in this film which circles around the work of Ozu, often as a counter-example, is Chishû Ryû, one of the great actors who appeared in many of Ozu’s films, here as the grafting monk who comes to give the deceased a protective Buddhist name for a mere $1, 000 bucks.

The film follows the high and low comedy of the three day event. Among the choice moments is Chizuko’s brother paying off the hospital while weeping, and you can't tell whether it's grief over his father or over the money. There's also a recurring elderly guest who can't figure out which direction is north.

The disc comes with video interviews with his widow Nobuko Miyamoto, who appeared spectacularly in all of his films, then his son, who also appears as a tyke in The Funeral, an episode of a Criterion Channel series about notable creative cinematic couples, a selection of Itami’s commercials for a dessert tart, for a company that later financed his features, and a booklet with a helpful essay by Pico Iyer and excepts from the diary Itami kept while making this first feature.

Itami went on to make a total of 10 pictures with his wife, including Tampopo, two Taxing Woman features, and an exposé of the yakuza. For that he was attacked in his garden and stabbed. Upon release from the hospital, he made a satire on the medical bureaucracy. His career came to an end in 1997, when he was an apparent suicide from the roof of his office building. A gangster claimed to reporter Jake Adelstein that the vengeful yakuza set up that scenario.

Thus his late career begins with a funeral and ends with a mysterious death. Between he made some of the best Japanese films of the modern era.

END_OF_DOCUMENT_TOKEN_TO_BE_REPLACED

Free Culture Radio
An Interesting Time To Be Alive

Rural Roots Rising
Anyone Can Be An Organizer