United States: Still the "greatest purveyor of violence in the world"? 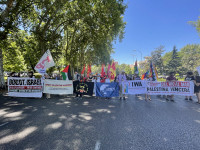 Russia's brutal invasion of Ukraine has once again, as during the Cold War, drawn the geopolitical battle lines, forcing countries to choose sides. And once again the United States has positioned itself as the champion of democracy and the foe of evil in the world. But of course it never was that simplistic, and it isn't now.

In 1968, one month before he was assassinated, Dr. Martin Luther King, Jr., in his now-famous "Beyond Vietnam" speech, called the U.S. "the greatest purveyor of violence in the world." Since then, this nation has supported death squads and repressive regimes in Central America, helped overthrow numerous democratically elected governments, invaded or sent troops to a host of countries, sent arms to brutal dictatorships and oppressive  regimes, and maintained the largest military on the planet, with some 600 military bases (Pentagon, 2013) overseas. The famous "peace dividend" that was supposed to arrive with the collapse of the Soviet Union and the supposed end of the Cold War, vanished with the "War on Drugs" and the "War on Terror," and U.S. military spending just keeps going higher and higher.

Despite the ravages of climate change that are only getting worse, and the massive wealth inequality that consigns millions to lives of despair and desperation, there are no signs that the United States is ready to renounce its history of unilateral aggression and domination and embark on a path towards global cooperation.

But there continues to be opposition around the planet to the projection of U.S. corporate and military power. Today's guest, Cody Urban, is a member of  the Resist U.S.-Led War Movement, which unites many of those campaigns and organizations.