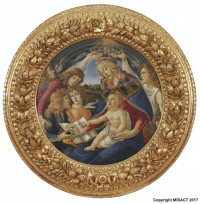 Botticelli's The Madonna of the Magnificat

On Tuesday, January 24, 2023, at 11.30am Joseph Gallivan interviews Mary Chapin [pronounced CHAY-pin with “ch” as in “chop”] about the painting “The Madonna of the Magnificat” by Sandro Botticelli. The 15th century masterpiece is on show now at the Portland Art Museum until May 7, 2023. Chapin, who is the Curator of Prints and Drawings at the museum, talks about Botticelli’s Christian and pagan symbolism, the use of curves in this composition, the way he changes fashions and place to suit the work’s owner, and whether the pre-Raphaelites were any good at hands.

Botticelli works in the Uffizi Museum in Florence:

FROM THE PRESS RELEASE:

The Portland Art Museum is pleased to present Sandro Botticelli’s masterwork Madonna of the Magnificat, a tondo (round painting) of the Madonna and Child with angels. This rarely seen work is a variant of the artist’s celebrated painting in the Uffizi Gallery in Florence, considered one of the finest Madonna and Child paintings of the Renaissance and a high point of Botticelli’s career.

Sandro Botticelli (1445–1510) was a leading artist of the Renaissance, a moment of tremendous creativity when artists and thinkers drew inspiration from the classical past and adopted a more humanistic approach. First apprenticed to a goldsmith, Botticelli later joined the workshop (bottega) of painter Filippo Lippi (ca. 1406–1469), who was praised by his contemporaries for his elegant compositions and skillful deployment of color. Over many years, Botticelli learned the methods of panel painting and fresco and absorbed Lippi’s refined style and proportions, attentiveness to fabrics, and one-point perspective. By 1470, Botticelli had his own independent practice and was gaining recognition for his work. He combined Lippi’s linear elegance with a more vigorous, sculptural form; a greater naturalism graces his art, always tempered by a search for ideal beauty.

Botticelli’s depiction of the Madonna and Child with angels is a masterpiece of both composition and symbolism. Painted in the tondo (round) format, Madonna of the Magnificat (ca. 1483) exhibits a series of harmonious curvilinear forms. The Madonna gracefully bends forward over Christ, embracing him with her arms and torso, while at the left, a standing angel dressed in rich carmine leans lovingly over two kneeling angels, enclosing them with his right arm. The dome of heaven, flecked with gold stars, ensconces the holy scene in a perfect circle. The rose motif of the Madonna’s throne, the fruit in her left hand, and the window behind her further the symphony of round shapes.

Madonna of the Magnificat was formerly in the collection of the late Paul Allen, who acquired it in 1999. Other masterpieces from Allen’s collection were featured in Seeing Nature: Landscape Masterworks from the Paul G. Allen Family Collection, which debuted at the Portland Art Museum in October 2015. This painting appears at the Museum on special loan from a private collector, presenting an extraordinary opportunity for the public to experience this superb artwork by an icon of the Italian Renaissance.

Organized by the Portland Art Museum and curated by Mary Weaver Chapin, Ph.D., Curator of Prints and Drawings. This is the seventh installment of the Portland Art Museum’s Masterworks | Portland series, which focuses on displaying individual works of outstanding quality by great artists. This presentation is made possible by the William G. Gilmore Foundation, Ann Flowerree, the Laura and Roger Meier Family, The James F. and Marion L. Miller Foundation, and Exhibition Series Sponsors.

Did you notice KBOO was off the air for a power outage during the storms just before Christmas? Since then, we are playing recorded shows only. A new UPS (uninterrupted power supply) will help us stay live on the air, but it adds to our bills. Can you help us pay for it to keep live programming on the air?

KBOO Radio is a volunteer-run nonprofit, and it needs your money if you are listening.

Show your support for KBOO programs like Art Focus by becoming a member of KBOO today.

Go to kboo.fm/give, or you can donate by texting K-B-O-O to 4-4-3-2-1. It’s our members who make KBOO possible so donate today. Thanks for tuning in and thanks for listening to volunteer powered, community supported K-B-O-O Portland.

To hear previous episodes of Art Focus or any of our KBOO public affairs programming, just go to KBOO dot F-M or listen on iTunes, Google Play, or wherever you get your podcasts.

Joseph Gallivan has been a reporter since 1990. He has covered music for the London Independent, Technology for the New York Post, and arts and culture for the Portland Tribune, where he is currently a Feature Writer. He is the author of two novels, "Oi, Ref!" and "England All Over" which are available on Amazon.com

Update Required To play the media you will need to either update your browser to a recent version or update your Flash plugin.
Download audio file
Topic tags:
Arts/Culture
Genre(s):
Arts and Culture