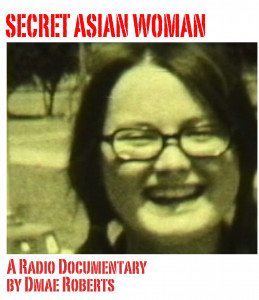 Secret Asian Woman, a half-hour personal exploration of identity and mixed race  produced by Dmae Roberts. Throughout her life especially living in Oregon, Dmae has had to bring up her ethnicity especially when it comes to the question: "What Are You?"  This piece was originally produced in 2008 and re-edited for 2020.

Through her personal story, Dmae charts four decades of a search by multiracial peoples for a name for their identity. The politics of calling out racism has changed through the years as has identification. In this half-hour  documentary, Dmae talks with other mixed-race Asian American women with identities not easily recognized by the general public. This fast-paced documentary addresses with humor the complexities involved in even discussing race.

Or read the full-length memoir "The Letting Go Trilogies: Stories of a Mixed-Race Family" by Dmae Roberts available on Amazon and Kindle. https://www.amazon.com/Letting-Go-Trilogies-Stories-Mixed-Race/

You can subscribe to the podcast on iTunes so you don’t have to miss a show.

And always browse our archive of shows at the official Stage and Studio website.

Funded by the Regional Arts and Culture Council Individual Artist program. You can learn more by going to Dmae Roberts' website or reading an essay version of this radio piece on StagenStudio.com.

You can also learn more about Dmae's work with"What Are You: Mixed-Race and Interracial Families in Oregon's Past and Future?"  facilitating discussions on mixed-race identity for the Oregon Humanities' Conversation Project.

Update Required To play the media you will need to either update your browser to a recent version or update your Flash plugin.
Topic tags:
Asian Pacific American, Women, History, Arts/Culture, Civil Rights/Human Rights
Genre(s):
Arts and Culture