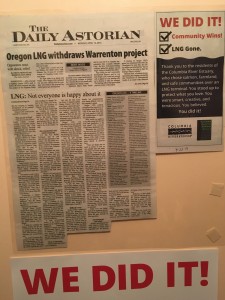 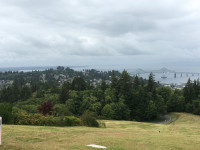 For twelve years residents of Clatsop County (in the NW corner of Oregon) battled proposals to build massive Liquified Natural Gas (LNG) terminals near the mouth of the Columbia River. On April 15, 2016, the last of these proposals was defeated, when Oregon LNG withdrew the permit request for their beleaguered project in Warrenton, just west of Astoria. After breathing a long sigh of relief and elation, anti-LNG activists have transformed their anti-LNG movement into a longterm movement to protect the Columbia Estuary from any new potential threats.

On this episode of Locus Focus we talk with Laurie Caplan, one of two women who led the fight to stop LNG in Clatsop County. We'll talk about why they won and the organizing models they created that are applicable to all the other fights against fossil fuel developent being waged across the Northwest.

Update Required To play the media you will need to either update your browser to a recent version or update your Flash plugin.
Download audio file
Topic tags:
Energy/Natural Resources, Environment/Climate