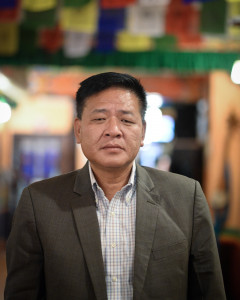 Mr Penpa Tsering the U.S. Representative for His Holiness the Dalai Lama & Speaker of the 15th Tibetan Parliament-in-Exile)

Speaker of the Tibetan Parliament-in-Exile and a Sikyong 2016 candidate, Penpa Tsering, has been appointed as the new Representative for the Office of Tibet in Washington, DC.  The Office of Tibet in the United States was established in 1964 to raise the issue of Tibet at the United Nations, coordinate visits of the Dalai Lama to North America, and mobilize support from the US and Canadian governments for the Tibetan cause. In April 2014 the Office relocated to Washington, DC, from New York.

Mr Penpa Tsering was born in 1967 at Bylakuppee, south India and is a Do-mey member of the Tibetan Parliament. He studied at the Central School for Tibetans, Bylakuppe and topped the merit list in Class XII. He graduated with Economics Major from the Madras Christian College, Chennai. His work experience includes running a private export expertise and a restaurant.

During his student days, he served as the General Secretary of both the Tibetan Freedom Movement and Nigerian Tibet Friendship Association. Later he served as the General Secretary of the Central Executive Committee of Do-mey. He then worked as the Executive Director at the Tibetan Parliamentary and Research Centre (TPPRC) at New Delhi from 2001-2008 before being sworn in as the speaker of the 14th parliament in 2008.