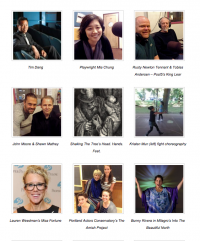 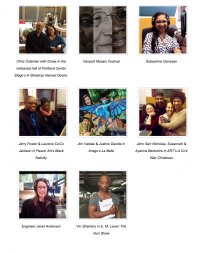 Dmae says goodbye to 2016 with an end-of-year special. In 2016, we presented and produced 52 shows. We'll revisit some of the best moments of Stage & Studio and we say goodbye to our longtime engineer Janet Anderson!

We'll hear highlights from some of the performing artists, groups, writers and filmmakers featured. Join us to hear  Chris Coleman (Portland Center Stage) talk about how his Southern roots helped him direct A Streetcar Named Desire, Bunny Rivera on the growth of Milagro Theatre,  John San Nicolas talking about discussions that came up post-election during Artists Repertory Theatre's "A Civil War Christmas,  fight choreographer Kristen Mun on safety in theatre,  Samantha van De Merwe (Shaking the Tree) on dealing with the anxiety of original production, Vin Shambry in E. M. Lewis' The Gun Show at Coho Productions talking about the need for actors of color to stay in Portland and Lauren Weedman a story of a bad tattoo she wrote in her new book, Miss Fortune.

And we'll hear a clip from Vanport Mosaic's Laura Lo Forti documenting Vanport survivor Mrs. Marge Moss, playwright Mia Chung reading from her play You for Me for You at Portland Playhouse and Tim Dang, former artistic director of East West Players in Los Angeles talking about his plan for diversifying the next generation of theatre artists.

Bunny Rivera in MIlagro's Into The Beautiful North

Chris Coleman with Dmae in the rehearsal hall of Portland Center Stage's A Streetcar Named Desire.

Update Required To play the media you will need to either update your browser to a recent version or update your Flash plugin.
Download audio file
Topic tags:
African American, Arts/Culture, Asian Pacific American, Latino/Hispanic
Genre(s):
Arts and Culture