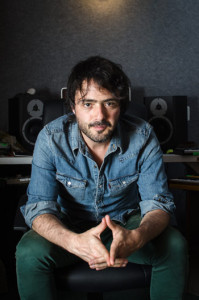 Sarika Mehta is joined in studio by Simón Mejía of Bomba Estéreo! According to Mejía, the band's name (which translates into English as "stereo bomb") is a Colombian term for "a really cool, awesome, bad ass party"

The origins of the group go back to 2001 when Bogotá native Simón Mejía (previously a member of 1990s Colombian alternative rock band Charconautas) was part of a loose collective of musicians and visual artists under the name A.M. 770. Their music was influenced by Colombian groups such as Sidestepper and Bloque de Busqueda who in the late 1990s had started combining traditional Colombian musical rhythms such as salsa and cumbia with modern electronic beats and dance music. A.M. 770's first musical production was the track "Ritmika" (based on a sample of a song by Venezuelan salsa band Los Blanco) on the album Colombeat, a 2002 compilation showcasing this new musical style which was put together by Colombia's foremost alternative rock band Aterciopelados for their new label Entrecasa.

By 2005 A.M. 770 had effectively become Mejía's solo project and he began to focus more on the musical side of his work, changing the name of the group to Bomba Estéreo. The first results of his new project was the seven-track mini-album Vol. 1 (2006), essentially a solo album but featuring contributions from other artists such as fellow A.M. 770 member Diego Cadavid. Having recorded Vol. 1, Mejía attended the Latin Alternative Music Conference in New York City and was able to secure an international distribution deal with California-based Nacional Records for future releases, with Colombian releases on the Bogotá independent label Polen Records.

Bomba Estéreo performed at the South by Southwest and Roskilde festivals in 2009, and in 2010 undertook a world tour that visited 32 cities as well as the Bumbershoot festival and Bonnaroo Music Festival. In 2011 they performed at the Coachella Festival and Austin City Limits Music Festival in the US, as well as Lollapalooza Chile and the Vive Latino festival in Mexico City, one of the major worldwide festivals for "rock en español".

The band's third full-length album, Elegancia Tropical, was released in 2012 on Polen Records in Colombia and on Soundway Records worldwide. The album was engineered and mixed by producer Joel Hamilton.[17] To promote the record the band undertook a tour of Colombia, followed by Mexico and the US throughout 2012 and 2013. Band members have said they miss suero while on tour away from Colombia. Their fourth full-length album, Amanecer, was released on June 2, 2015, on Sony Music. One song, "Soy Yo", was selected for the soundtrack of FIFA 16. The music video for "Soy Yo", released in September 2016, featured the debut of Sarai Gonzalez as a nerdy-looking Latina girl with a spunky personality standing up to bullies on the "mean streets" of Brooklyn, New York. The video received over 6.5 million views as of early November 2016.

Last week, Bomba Estereo’s Ayo debuted at No. 7 on Billboard’s Top Latin Albums chart. With an even more pronounced focus on Colombian folk sounds intertwined with irresistible dance loops and beats, the album is one global party with deep roots.

While Colombia’s hippest party band is currently in the midst of a slew of European dates, Americans should get ready for the fun to hit stateside with the group's upcoming tour dates next month in the U.S. and Latin America, including three shows opening for Arcade Fire.

The thing about Bomba -- made up of Simón Mejía and sultry chanteuse Liliana Suamet -- is you can’t just listen to their music; you have to feel and experience it. Before you embark on that adventure, here are six things to know about the band, Ayo and that Arcade Fire partnership.

1. On opening for Arcade Fire: “Three years ago we played a festival in Montreal and Win Butler went and became a fan," says Mejía. "Time passed, we were coincidentally in the same booking agency and met him face to face. We had instant chemistry and he said, ‘Why don’t you do a few dates with us in Latin America?’"

2. On the meaning of the word Ayo: “The word hayo, with the h, comes from the Coy Indians,” says Saumet. “It’s the mix of coca leafs they chew on for energy when they need to walk long distances.” However, adds Mejia, “the meaning of the word is very ample. It was our way of paying our respects to the Sierra Nevada de Santa Mart [in Colombia] and this indigenous world. The word has many meanings, but we see it as a representation of the album, of nature and light. And it has no language. It can be said in any language.”

3. On using Spanglish in their songs: “Today barriers are fading and music is more and more universal. It becomes language,” says Mejía. “That’s what makes our music cool. We can play it in Spanish in places where no Spanish is spoken and people still connect.”

4. On their new tour: “Everything is new,” says Saumet. “Each album has new information. We have two new band members, more African guitars, live percussion, more folklore.” Plus, adds Mejía, “The repertoire is new. We’re playing the album top to bottom, like a block.”

5. A song Liliana recommends: “’Quimica (Dance With Me).’ It’s a very danceable song, a party song, very much a Bomba track. It’s all about having a good time and about that certain attraction that can exist between people.”

6. A song Simón recommends: “'Siembra.' It opens the album and it embodies the concept we’ve been searching for since the beginning. It’s a message about the land, that has a lot to do with what’s happening at an environmental level. It’s a beautiful song, thought for our children.”

Update Required To play the media you will need to either update your browser to a recent version or update your Flash plugin.
Download audio file
Topic tags:
Arts/Culture, Media, Music