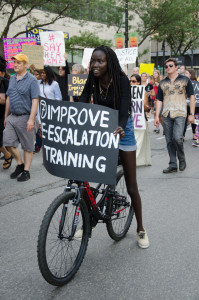 On Tuesday, KBOO reported on a report released October 3 by the Compliance Officer/Community Liaison (COCL), the body tasked with assessing the city's compliance with the terms of a settlement reached with the US Department of Justice.

The settlement was reached after the DOJ found that Portland Police engaged in a pattern and practice of using excessive force against persons in the midst of mental health crises, exemplified at the time by the death of James Chasse in 2006 and the shooting of Aaron Campbell in 2010, among other incidents. While these incidents often elicited acknowledgement of poor training by Bureau command, the COCL's latest report again points out a disconnect between the intentions of command staff, the Mayor's office, the DOJ, and community on one side, and rank-and-file officers, Bureau training instructors, and police unions on the other.

In this piece, KBOO reporter Sam Bouman takes a look at one aspect of police training covered critically in the report: de-escalation. The debate over this crucial component of a police officer's mental arsenal has resulted in a disconnect between the intentions of new Bureau policies and the way those policies are taught--or not.

You can read the report and its appendices here. Fair warning: it is long and dense, and the appendices are longer and denser. The part of the appendices referred to in this audio piece, "Appendix IV-2: COCL Observation of PPB In-Service Training September 13-16 2016," begins on page 132 of this PDF.