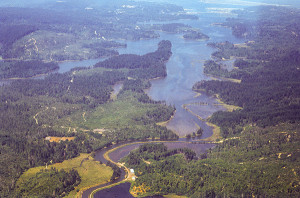 On Wednesday, the Coos River Estuary filed a motion to intervene in the permitting process for the Jordan Cove Energy Project. The motion was filed as part of proceedings before the Federal Energy Regulatory Commission, or FERC.

Jordan Cove is a proposed terminal for liquefied natural gas, known as LNG. Part of the project is a 232-mile-long pipeline that would deliver natural gas from Malin, in Klamath County, over mountains and rivers to Coos Bay. There, the gas would be supercooled to a highly volatile liquid state and loaded onto massive tankers for delivery to East Asian energy markets.

The whole project has been in various stages of permitting and environmental review for over ten years. Citizen activists have never been far behind, concerned with potential environmental and health impacts, as well as the way the companies behind the project have shouldered their way through local, state and federal safeguards.

This is not the first time an ecosystem or natural feature has attempted to intervene in a court case or bureaucratic procedure in Oregon, not even this year.

Mary Geddry, a member of the Coos Commons Protection Council, the group that delivered the motion on behalf of the estuary, spoke to KBOO reporter Sam Bouman over the weekend.