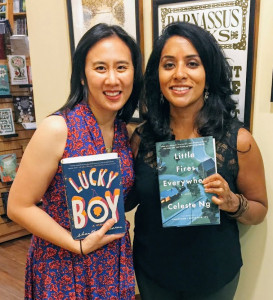 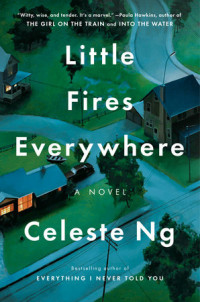 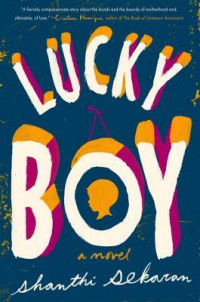 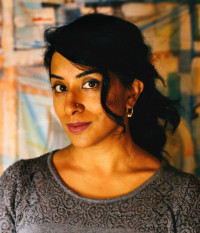 Sarika Mehta talks to two powerful writers about the intersections of parenting, gender and race.  Both Celeste Ng and Shanthi Sekaran write about the weight and potential of motherhood.

was a recipient of a Pushcart Prize in 2012 for her story Girls, At Play.  Ng's fiction has appeared in One Story, TriQuarterly, Subtropics, and more. Her essays have appeared in Kenyon Review Online, The Millions, and elsewhere. Ng taught writing at the University of Michigan, and she has also taught at Grub Street in Boston.  Ng also was an editor of blogs at the website Fiction Writers Review for three years.

Her debut novel, Everything I Never Told You: A Novel, is a literary thriller that focuses on an American family in 1970s Ohio.   The novel had four drafts and one revision before completion, which took 6 years. While working on her first novel, Ng stated that she pulled from her own experiences of racism as well as her family and friends.  The book, which the Los Angeles Times described as an "excellent first novel about family, love, and ambition," won Amazon book of the year in 2014.  Everything I Never Told You has also been translated into 15 languages.

From the bestselling author of Everything I Never Told You, a riveting novel that traces the intertwined fates of the picture-perfect Richardson family and the enigmatic mother and daughter who upend their lives.

In Shaker Heights, a placid, progressive suburb of Cleveland, everything is planned – from the layout of the winding roads, to the colors of the houses, to the successful lives its residents will go on to lead. And no one embodies this spirit more than Elena Richardson, whose guiding principle is playing by the rules.

Enter Mia Warren – an enigmatic artist and single mother – who arrives in this idyllic bubble with her teenaged daughter Pearl, and rents a house from the Richardsons. Soon Mia and Pearl become more than tenants: all four Richardson children are drawn to the mother-daughter pair. But Mia carries with her a mysterious past and a disregard for the status quo that threatens to upend this carefully ordered community.

When old family friends of the Richardsons attempt to adopt a Chinese-American baby, a custody battle erupts that dramatically divides the town–and puts Mia and Elena on opposing sides.  Suspicious of Mia and her motives, Elena is determined to uncover the secrets in Mia’s past. But her obsession will come at unexpected and devastating costs.

Little Fires Everywhere explores the weight of secrets, the nature of art and identity, and the ferocious pull of motherhood – and the danger of believing that following the rules can avert disaster.

is an Indian American educator and novelist known for such books as The Prayer Room and Lucky Boy. Sekaran is an Adjunct Professor at the California College of Arts and St. Mary's College of California, where she teaches creative writing. Sekaran is working with Eva Longoria,David Schulner and Ben Spector as co-executive producer of TV Series based on her novel Lucky Boy.

A heart-wrenching novel about the transformative power of motherhood and the redemptive beauty of love, perfect for readers of Jacquelyn Mitchard, Jenny Offill, and Cristina Henriquez.

“A fiercely compassionate story about the bonds and the bounds of motherhood and, ultimately, of love.”—Cristina Henríquez, author of The Book of Unknown Americans

NAMED ONE OF LIBRARY JOURNAL‘S TOP TEN BOOKS OF 2017

In this astonishing novel, Shanthi Sekaran gives voice to the devotion and anguish of motherhood through two women bound together by their love for one boy. Soli, a young undocumented Mexican woman in Berkeley, CA, finds that motherhood offers her an identity in a world where she’s otherwise invisible. When she is placed in immigrant detention, her son comes under the care of Kavya, an Indian-American wife overwhelmed by her own impossible desire to have a child. As Soli fights for her son, Kavya builds her love on a fault line, her heart wrapped around someone else’s child. Exploring the ways in which dreams and determination can reshape a family, Sekaran transforms real life into a thing of beauty. From rural Oaxaca to Berkeley’s Gourmet Ghetto to the dreamscapes of Silicon Valley, Lucky Boy offers a moving and revelatory look at the evolving landscape of the American dream and the ever-changing borders of love.

Update Required To play the media you will need to either update your browser to a recent version or update your Flash plugin.
Download audio file
Topic tags:
Arts/Culture, Community Building, Family, Fiction, Gender, Race, Women