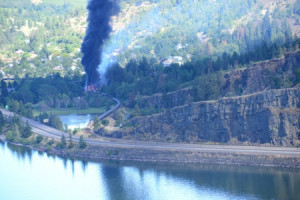 On January 4th, the Oregon Court of Appeals reversed, in large part, a Land Use Board of Appeals (LUBA) decision that undermined Portland’s landmark fossil fuel terminal zoning amendments, passed unanimously by the city council in December 2016.

The court ruled that Portland did not violate the Dormant Commerce Clause of the U.S. constitution.

This has opened a pathway for local governments to continue to take action to protect a city's environmental health and combat climate change.

KBOO’s News Director Zeloszelos Marchandt spoke with Dan Serres from Columbia Riverkeeper for more on this.

DAN SERRES: In 2017 LUBA had ruled that the city had overstepped the commerce clause of the Constitution. And the City of Portland, Columbia Riverkeeper and our partners challenged that ruling at the Court of Appeals. What happened is, essentially, the Court of Appeals overruled LUBA on this very critical legal finding, and they affirmed the constitutionality of what Portland had done, essentially concluding that Portland had the right to protect the health and safety of its residents from very dangerous fossil fuel projects like oil train terminals in passing its ordinance. So, to rewind even a little bit further, this all pertains to a 2016 unanimous vote by the City Council of Portland to restrict major new fossil fuel infrastructure in the city of Portland. This was lauded throughout the world, really, as a concrete local step on climate action and something that could be done regardless of what the federal government is doing, and dropping the ball on climate change.

KBOO: Is there any chance that this could be threatened again, or is this the final word?

DS: Well, it’s not the end of the story. So, what the court did not do yesterday was fully reinstate the ordinance. To get there, we have to once again go back to the City Council, and they will have to make additional findings on a couple of land use issues, and then basically pass the ordinance again. And so, Ted Wheeler, our mayor, said yesterday that he expects the Council to move quickly and thoroughly and do its work to try and reinstate this policy to full affect. So, we’re encouraging folks to stay connected with groups like Columbia Riverkeeper, 350PDX, Oregon Physicians for Social Responsibility, Portland Audubon and others, who have been engaged in this process. Stay tuned, because we think there will be more action at the city of Portland to make sure that this policy goes into full effect sometime in 2018.

KBOO: So we’ve got probably another year, it sounds like, of making sure this totally does go into effect?

DS: That’s right. The Portland Business Alliance told Willamette Week yesterday that they hope to work with the City Council to amend this policy, which is from our perspective, code for standing in the way of Portland’s bold climate action. The PBA should be ashamed of its effort to block this very popular, very widely supported climate action. And it’s also an action that protects the health and safety of Portland residents. So, we think that we’re going to need to be vigilant as this goes back to the city, and really encourage them to defend this policy, to put it into effect. They did an outstanding job arguing at the Court of Appeals on this issue, and we really look forward to standing in city council again to make sure this policy is put into full effect.