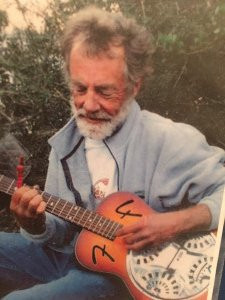 Delighted to have my dear Uncle John come play on the show, and talk about his life and music.

*Unfortunately our broadcast was preempted when we originally planned to air this but we recorded it and are now airing it in honor of his 70th Birthday next week!

Straight from Mr. John Nelson himself:

"Born in southern California in 1948 the only year Pasadena had up to 6 inches of snow. Groomed for white collar, I entered the University of California just as the Vietnam protest begin. I got an education and an attitude I wasn't supposed to get. I wound up on a commune in northern British Columbia beyond the reach of the military draft. Long winters in wood heat cabin, a poor quality 12 string guitar, and some lonesome blues. No one could teach me because I had learned to play other friend's guitars upside down; right handed guitars left handed. There were precedence for such behavior: Elizabeth Cotton the old blues singer; Dick Dale with surf music; others less notable. Between pairing up, two children, a career in construction and back – 40 projects, there wasn't time or inclination for much guitar. But when I moved to Northern California eventually and build my house I got more serious. My first CD has the title song "Better Late Than Never". Writing and playing music was something I wanted to do since high school. All I had to do was get over stage fright and go to my first open mic at age 62. Oh, it was scary. Nobody in the room was over 25! I played my three best dinosaur songs ("Don't Think Twice", "House of the Rising Sun", and Mark Knopfler's "Romeo and Juliet") Lo and behold, they liked it; they asked for one more, even though the playlist was long. I didn't need much more encouragement to practice, create, and drive my wife crazy. Today, I play a lot of volunteer music, a few paying gigs. If I had any computer skills, I could probably chase down more work. Work that's not really work. But who am I kidding: I'm 70, with arthritis and more frequent brain farts. Still, I won't give it up until Carnegie Hall calls me."

Be sure to tune in just before midnight to hear what musical and tales he has to weave for us!

Update Required To play the media you will need to either update your browser to a recent version or update your Flash plugin.
Topic tags:
Music, Elders
Genre(s):
Blues, Rock and Roll