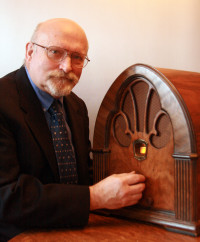 As we’ve said many times, radio is Mr. Jones’s favorite medium. And it’s called a medium because, to paraphrase Ernie Kovacs, it’s neither rare nor well-done. Ernie was actually talking about the early days of television. But he could have easily been describing this show.

At one time, however, radio was our nation’s primary medium, and it was very well done. Join us this morning as we travel back to those thrilling days of yesteryear, or is it those thrilling years of yesterday? Our guide is old-time radio expert Dick Karman of Reliving Radio. And reliving radio is just what we’ll be doing for the next hour. Well, that and drinking egg nog.  It's going to be another beautiful day in the neighborhood!

Update Required To play the media you will need to either update your browser to a recent version or update your Flash plugin.
Topic tags:
Arts/Culture, Fiction, History, Humor, Media, Radio Theater
Genre(s):
Arts and Culture, Radio Theatre, Spoken Arts