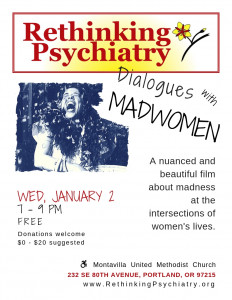 Host Paul Roland talks with Allie Light about her 1994 Emmy-award winning flim, "Dialogues with Madwomen," which features seven women, including the filmmaker, describing their experiences with madness and recovery. It is a raw and honest film about how personal and societal trauma is often underneath personal psychic distress. Acknowledging that “madness” is often a way of explaining women’s self-expression, this film challenges us to listen to the creativity and courage of survivors.

It will be shown as part of Rethinking Psychiatry's monthly event series, Wednesday, January 2 at 7 PM at the Montavilla United Methodist Church
232 SE 80th Avenue in Portland.

Here's a description of the film from the director's website:

"I was always so afraid that someone would ask me where I was when JFK was shot, and I would have to say I was in a mental institution", says director Allie Light. This moving and informative film features seven women--including the filmmaker--describing their experiences with depression, manic depression, multiple personalities, schizophrenia, euphoria and recovery. Candid interviews are enriched with dramatic reenactments and visualizations of each woman's history, emotions and dreams--the private symbols of madness and sanity. The social dimensions of women and mental illness are revealed in testimony about sexual assault, incest, racism and homophobia, the abuses of the medical establishment, family and church. Acknowledging that "madness" is often a way of explaining women's self-expression, this film charges us to listen to the creativity and courage of survivors. Dialogues With Madwomen is a ground-breaking film about women and mental illness. The film is available from Women Make Movies

Winner of the 1991 Academy Award for Best Documentary Feature  (In the Shadow of the Stars) and the 1994 National Emmy Award for best interview program for Dialogues, Allie Light writes, directs and produced documentary films with her partner, Irving Saraf, who died in 2012. Ms. Light lectured in film at City College of San Francisco and, for ten years, in the Women Studies Program at San Francisco State University.  Her life story appears in On Women Turning 50, Celebrating Mid-Life Discoveries, by Cathleen Rountree.

Her first new film in nine years, and her first non-documentary, Any Wednesday, is just out,

Update Required To play the media you will need to either update your browser to a recent version or update your Flash plugin.
Download audio file
Topic tags:
Activism, Health, Gender, Recovery, Women