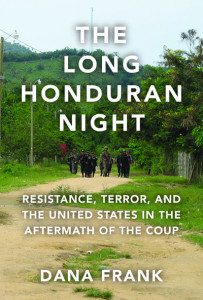 Laurie Mercier talks to Dana Frank, professor of history emerita at University of California Santa Cruz, and author of many books, including the recent The Long Honduran Night: Resistance , Terror, and the United States in the Aftermath of the Coup. They discuss the US role in the 2009 coup, its ten-year legacy, continued US support for repression, privatization, and dictatorship in Honduras, and what people here can do to support the Honduran people and their movements for justice. Dana Frank will be in Oregon next week, speaking Tuesday, April 10, at Grass Roots Books and Music in Corvallis, 7:00 p.m.  and on Wednesday, April 11, at University of Oregon Knight Library, 4:00 p.m.

END_OF_DOCUMENT_TOKEN_TO_BE_REPLACED

Pastures of Plenty
Welcome to April