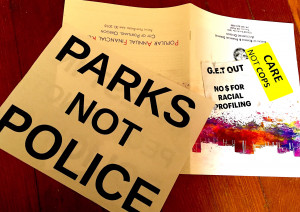 Voices from the May 9 forum on Portland's city budget

[Scroll down for transcript]

Selections from some of the public testimony at the May 9 hearing on the City of Portland Proposed Budget.

The Mayor’s draft Portland budget for 2019-2020 proposes, among other things, closing community centers; private leasing of Laurelhurst Dance Studio, Hillside and Fulton Community Centers; cutting 70 jobs, and reducing and eliminating programs.  It would increase funding for police and fund studies of the James Beard Market and the Frog Ferry Passenger Water Taxi, a proposed aquatic taxi line that would run from Vancouver to Lake Oswego.

Commissioner Hardesty’s proposed amendments would, among other provisions, eliminate funding for the studies of the James Beard Market, the Frog Ferry service, and police body cameras, as well as cutting funding for the Gang Enforcement Team.  It would preserve the jobs, programs, and community centers in the Parks and Recreation department, and fully fund the census program and the public finance system for city elections.

You can find the whole budget proposal here.

Speakers heard in these excerpts:

You can submit your comment on the budget here.

[Kelsey Owens]: Taking away a community center and then talking about wanting to continue funding something that just basically incarcerates people and disproportionately attacks Black communities makes no sense. We cannot afford the private centers and not everybody over there is rich. I’m on OHP.  What am—I don't have $1,100 to afford preschool in the fall when you close my $200 option.

[Emily Golden Fields]:  It is the heart of our neighborhood.  It is the only affordable care option. We have a waiting list of up to a hundred people trying to get into Aftercare. It will create a child care desert in this city. That is what this will do, and privatizing and closing them down is just the wrong course. It's not the moral decision it's not the correct decision and it's not necessary. Mary King, an economist,  just wrote a way that we can expand the Portland Clean Energy Fund to actually fund Mental Health Services, to fully fund parks, to expand our preschools. This is the heart of communities;  we should be expanding them, we should be funding them, they are what make working families be able to live in the city.

[Alyssa Pagan]: When you have a thriving community then then you have a community that doesn't need to be constantly policed, okay?  Okay, so that’s why we say Care, not Cops.  Has anyone here ever seen a sweep of a homeless encampment? It is one of the most disgusting things that I have ever seen in my life is watching someone who is barely surviving and only wants to sleep under a little bit of shelter, and you send in the police and you arrest them, and you take away everything they have and you throw it in the garbage. And 52% of the arrests that your police made last year were of those people. So I am letting you know that I am not the only one who sees the inhumanity in a decision like that.   The money that you want --you want to take that track record and you want expand-- you want to give them more money.  “Thank you! thank you for having 52% of your arrests be people who are barely surviving,  that could die any day”—Some Portlanders die at the hands of the police, and you want to give them more money.  We’re watching.

[Sandra Comstock]:  Like community centers,  having welcoming and attended hygiene access increases community connection, mutual support, and mental health, and opportunities for housed and unhoused collaboration, reduces strife, fear,  and the impulse to call 911 every 15 minutes on “unwanted” people.  If we do these things,  we don't need the same amount of policing anymore.

[Sarah Iannarone]:   I want to question the 1.5 million out of the transportation budget for derelict RV enforcement. I am against displacement without replacement for any person experiencing houselessness, and to spend 1.5 million in transportation money to sweep people who essentially have a home is not a good use for transportation dollars. And finally,  I would like to question the false choices that we’re being presented with here tonight.  Oregon has the third fastest number of millionaires after North and South Dakota.  You have to assume a good number of those are in Portland.  If we only had millionaires in Portland-- if there were only 50 people as rich as you, Mayor Wheeler, and they taxed themselves 10%, we could cover the entire park shortfall annually. That’s 50 millionaires. The number of millionaires that we probably have is far far higher.

[Demitra Gianculius]: In the last several weeks our community has learned of the expert financial analysis commissioned by Parks and Recreations Union. The result of this analysis has revealed that general fund revenues over  expenses have yielded an average 54 million dollar surplus over the last five years; and also that unrestricted net assets in the internal services fund average almost 90 million dollars, also in the last 5 years. Meanwhile,  we learned that general fund expenditures have been declining by as much as 6% per year.  So we're confused; in light of these figures we do not understand why the bureau wishes to cut programs,  especially to cut full-time, frontline, expert, dedicated staff who are  the heart and soul and the lifeblood of our community centers. We have called, we have emailed, we have sent letters, we've offered many solutions, but we feel we've been kept in the dark. What happens when we don't see this transparency is that we are left to speculate and hypothesize ulterior motives, which does not build goodwill.  Our quality of life, the health of our communities, are about to be irrevocably diminished, and we feel betrayed by that.

Update Required To play the media you will need to either update your browser to a recent version or update your Flash plugin.
Download audio file
Topic tags:
Economy, Government/Politics, Activism, Community Building, Housing/Homelessness, Police