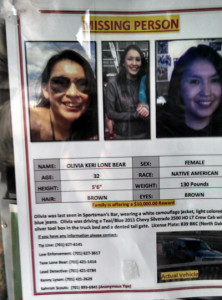 Testimonies: Missing and Murdered Indigenous Women and Girls by NV1

Dmae Roberts presents an excerpt of a longer program produced by Prairie Public Radio and distributed by Native Voice One at NV1.org.

Warning: There is a discussion about surving sexual assault and rape.

Testimonies: Missing and Murdered Indigenous Women and Girls zeros in on the problem of missing and murdered indigenous women and girls. It’s a problem that burst into public awareness across the Upper Midwest in the summer of 2017. That’s when a young indigenous woman who was eight months pregnant was found murdered near Fargo, North Dakota. But the issue isn’t new news within tribal communities. Rather it’s an ongoing problem that has deep roots.

In this episode, you’ll hear a round table discussion with producer and host, Meg Lindholm, and three guests.

Chalsey Snyder is an enrolled member of the MHA Nation on the Fort Berthold reservation in North Dakota. She is a mother and an author of “Loren’s Law,” the first anti-human trafficking law in Indian Country. She also serves on the Native American Commission in Fargo, North Dakota.

Dr. Donald Warne is a member of the Oglala Lakota tribe from Pine Ridge, South Dakota. He also served as Chair of the Department of Public Health at North Dakota State University which offers the only MPH in Native health in the U.S. Currently he is Associate Dean for Diversity, Equity and Inclusion at the University of North Dakota and the Director of Indians into Medicine program at UND’s School of Medicine and Health Sciences.

Whitney Fear is a member of the Oglala Lakota tribe from Pine Ridge, South Dakota. She is a nurse for Homeless Health Services at Family HealthCare in Fargo and she is a mother of twins. She also serves on the Native American Commission in Fargo, North Dakota.

Hear the complete show at Native Voice One at https://www.nv1.org/testimonies-missing-and-murdered-indigenous-women-and-girls/  and the NV1 app.

END_OF_DOCUMENT_TOKEN_TO_BE_REPLACED

Words and Pictures
Remembering Animator Bruce Bickford - from the Archive

Between the Covers
Hurricane Season