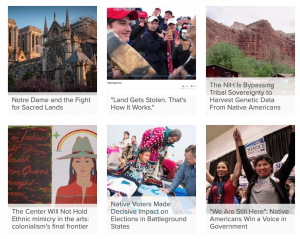 “Writing in mainstream media allows me to put a Native perspective on newsworthy events in front of Americans who have never considered that point of view. It also allows me to intellectually address the issues Native people face and help our people process these experiences. We do not have a media that does this for us, so every article I write is putting ideas in the public sphere that would not normally be there.”

Have a question about what it's like to cover America from the perspective of a Native journalist?

Jacqueline Keeler is a Diné-Ihanktonwan Dakota writer based in Portland, Oregon. She has contributed to The Nation, Salon.com, The DailyBeast, Quartz and many other publications. She has been interviewed on PRI's The World, BBC, MSNBC, and Democracy Now!. She is the editor of The Edge of Morning: Native Voices Speak for the Bears Ears from Torrey House Press.

Update Required To play the media you will need to either update your browser to a recent version or update your Flash plugin.
Download audio file
File(s):

Today's program like most raised so many areas for further discovery and discussion. I like best your valiant efforts to analyze and think critically even with calls coming in that are often more about the callers' issues than those of First Nations within the de facto Global Nation\State\Corporate sovereignty system.

I only thought to call in a minute or two before your too-brief hour concluded. Your coverage of issues mostly centered in the lower 48 states is even more challenged since we in the U.S. do not have a national PUBLIC INTEREST broadcaster insulated from corporate capture like Canada's CBC (although corporate & global PRIVATE INTEREST pressure always threatens the CBC with underwriting, disruptive and format constraints on free-ranging thought and institutional analysis that characterize the "People's Broadcast Spectrum and Net Neutral Cyber Space" here in The Land of the Spree and Home of the Knave, thank you Groucho & Marx brothers...).

I do hope you can fill some of KBOO's broadcast time, even after midnight so long as there is an audio archive on KBOO's site for folks to listen and share content, by zooming in on the most overlooked and largest in scale First Nation of Nunavut the Inuit lands of Canada. Especially as Climate Change creates greater accessibility to these near Arctic Circle lands, waterways and sea scapes.

Here are some links your listeners might find interesting, most from sources north of our corporate-captured border where the Public Interest has a fairer fight in competing against Private Interest concentrations of wealth and control over resources, cultural as well as natural.

My attention got focused on socio-economic as well as cultural developments in Nunavut through the music being produced and a wonderful weekly World Music Program in Baltimore County from the non-commercial broad\netcasters at WTMD at Towson, Maryland's college radio. The weekly program on Sunday afternoons is called DETOUR RADIO and is hosted by Paul Hartman, the former co-founding editor of DIRTY LINEN MAGAZINE of WORLD MUSIC & FOLK CULTURE that had a 20+ year run publishing out of Baltimore. Hartman was taken by the recordings a few years ago of a new band singing in the Inuit languages and making terrific new music, band called THE JERRY CANS. They made Paul Hartman's Top Ten list for 2017:
https://detourradio.com/2017/12/10/paul-detour-hartmans-top-10-songs-of-...

More coverage from what's left of the Music Press on what the breakthrough of The Jerry Cans onto World Music like Tribe of Red portends within the First Nations and beyond:
http://beatroute.ca/2019/01/12/the-jerry-cans/
https://www.buzzfeed.com/lukeottenhof/the-jerry-cans-inuit-folk-rock
http://exclaim.ca/music/article/we_are_going_to_be_the_change_nunavut_ba...

I'd read of the recognition and special status that Canada was according this vast territory and its peoples back in the formative stages of the 1990's but the Sins of Omission in U.S. Mass Media and especially news and public affairs meant I was only getting news on Nunavut's development via my increasing forays to the CBC's Public Interest News online programming. Here is the page of links to recent CBC archive of coverage of Nunavut issues. Human interest stories dominate like U.S. dumbed down commercial news. However, if you scroll down you'll find more substantive policy and resource issues are covered that sure do affect U.S. and effect our place in the Globalizing World:
https://www.cbc.ca/news/canada/north/topic/Location/Nunavut

A view from Canada's capital of Ottawa for the unsurprising absence of political economy in serious Cost\Benefit analyses circulating in academic circles:
https://thenorthernreview.ca/index.php/nr/article/view/11

Institutional critique and analysis however gets air-time on CBC as it is a Public Interest chartered broadcaster. Unlike our own Corporation for Public Broadcasting which in its creation under LBJ back in 1967 put a Cold War end to Educational and what little Public Interest broadcasting existed in the U.S. So that while journalist-scholars like Naomi Klein can teach university and appear on college and community radio in the U.S. our corporate-captured News broadcasters do not welcome her News & Views.

Here on CBC a few years back before our own STANDING ROCK privately militarized stand-off we see Naomi Klein and activist Lucy Lawless inviting others to discuss Nunavut developments with extractive pressures that lit the spark of the Water Defenders conflicts in the Lower 48 and the pipeline projects under Obama and Trump (with Canadian engineering concerns set to profit and mostly Canadian jobs on the line):
https://www.cbc.ca/news/canada/north/lucy-lawless-naomi-klein-join-fight...

The serious scholarship and academic opportunities locally in Nunavut and the ongoing
discussions beyond in the Globalization Sphere is always just a search away...:
https://www.arcticcollege.ca/scholarships
https://www.policyalternatives.ca/publications/reports/globalization-and...

END_OF_DOCUMENT_TOKEN_TO_BE_REPLACED

Words and Pictures
Remembering Animator Bruce Bickford - from the Archive

Between the Covers
Hurricane Season