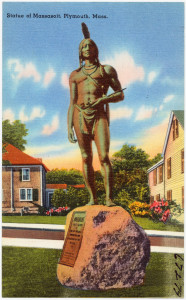 Frann Michel continues digesting the meaning of the USA’s harvest holiday. Reading from recent writing by indigenous activists and historians, she traces the myth of Thanksgiving, notes the history of native resistance to genocide, and touches on the work of activists with the Lakota Law Project and The Red Nation.

Indigenous Voices on A Colonial Holiday (2014)

Text (scroll all the way down for audio link):

Much of the United States is still full of it.  Full of turkey and stuffing and yams, full of pumpkin pie, and full of lies about the past and about the present.

In his book This Land Is Their Land: The Wampanoag Indians, Plymouth Colony, and the Troubled History of Thanksgiving, historian David Silverman summarizes the Myth, in which

friendly Indians, unidentified by tribe, welcome the Pilgrims to America, teach them how to live in this new place, sit down to dinner with them and then disappear. They hand off America to white people so they can create a great nation dedicated to liberty, opportunity and Christianity for the rest of the world to profit. That’s the story—it’s about Native people conceding to colonialism.

This story omits the history of  at least 12,000 years of indigenous life on this continent, and about a hundred years of colonialism in New England before that 1621 feast.  The Wampanoags—or at least some of them, led by Ousamequin, often called by his title, Massasoit--were interested in allying with the English at Plymouth not out of noble friendliness but because the tribe had already been decimated by disease brought by the European arrivals, and wanted allies in maintaining their territory against their traditional rivals the Narragansets, who had escaped the epidemic.

It also omits what came later, including the continued seizure of native lands.    Philip Deloria, writing in the New Yorker, summarizes “the ways the English repaid their new allies”:

The settlers pressed hard to acquire Indian land through “sales” driven by debt, threat, alliance politics, and violence. They denied the coequal civil and criminal jurisdiction of the alliance, charging Indians under English law and sentencing them to unpayable fines, imprisonment, even executions.

In 1637 the Governor of the Massachusetts Bay Colony declared a day of Thanksgiving to celebrate the massacre of 700 men women and children of the Pequot tribe, after which the survivors were enslaved and some of them sent to the Caribbean

This sort of treatment led the natives to realize that, as Silverman puts it, “if they didn't rise up immediately, they were going to become [at best] landless subordinates to English authority.”

Native groups joined together in what became known as King Philip’s war. As Deloria tells it, in

1675 and 1676  Native soldiers attacked fifty-two towns in New England, destroyed seventeen of them, and killed a substantial portion of the settler population. The region also lost as much as forty per cent of its Native population, who fought on both sides. The war split Wampanoags, as well as every other Native group, and ended with indigenous resistance broken, and the colonists giving thanks.

Part of the Plymouth celebration included mounting the head of Ousamequin’s son Pumetacom “above their town on a pike, where it remained for two decades.” Deloria points out that,

Like most Colonial wars, this one was a giant slave expedition, marked by the seizure and sale of Indian people. Wampanoags were judged criminals and—in a foreshadowing of the convict-labor provision of the Thirteenth Amendment—sold into bondage. During the next two centuries, New England Indians also suffered indentured servitude, convict labor, and debt peonage, which often resulted in the enslavement of the debtor’s children.

The less brutal holiday that we celebrate today took shape two centuries later, as an effort to entrench an imagined American community. In 1841, the Reverend Alexander Young explicitly linked three things: the 1621 “rejoicing,” the tradition of autumnal harvest festivals, and the name Thanksgiving. ...

A couple of decades later, Sarah Josepha Hale, the editor of Godey’s Lady’s Book, proposed a day of unity and remembrance to counter the trauma of the Civil War, and in 1863 Abraham Lincoln declared the last Thursday of November to be that national holiday, following Young’s lead in calling it Thanksgiving.

As Silverman argues,  the myth and the holiday

gained purchase in the late 19th century, when there was an enormous amount of anxiety and agitation over immigration. The white Protestant stock of the United States was widely unhappy about the influx of European Catholics and Jews, and wanted to assert its cultural authority over these newcomers. How better to do that than to create this national founding myth around the Pilgrims and the Indians inviting them to take over the land?

This mythmaking was also impacted by the racial politics of the late 19th century. The Indian Wars were coming to a close and that was an opportune time to have Indians included in a national founding myth. You couldn’t have done that when people were reading newspaper accounts on a regular basis of atrocious violence between white Americans and Native people in the West. What’s more, during Reconstruction, that Thanksgiving myth allowed New Englanders to create this idea that bloodless colonialism in their region was the origin of the country, having nothing to do with the Indian Wars and slavery.

In 1970, Wampanoag leader Wamsutta Frank James  was invited to give a speech at a banquet celebrating the 350th anniversary of the landing of the Pilgrims, and planned to include the Pequot Massacre and the story of King Phillip’s War in his remarks. But after reading a draft of his talking points, the dinner’s organizers decided to cancel the speech, which prompted James to  start the National Day of Mourning.

Perhaps ironically, the annual day of mourning takes place on Cole’s Hill in Plymouth, site of a statue of Massasoit. Such statues proliferated in the early twentieth century, much as Confederate monuments did, and for similar reasons. Lisa Blee and Jean O’Brien suggest in their book Monumental Mobility: The Memory Work of Massasoit that The Massasoit statue links “the mythic memory of the 1621 feast with the racial, ethnic, and national-identity politics of 1921, when the original statue was commissioned.”    The legend of the generous indians and the harmonious feast with the Pilgrims provides a tale of white, Protestant founders to divert attention from early twentieth century immigration and Jim Crow violence.

These conflicts are of course not just historical.

In September 2018, the Department of Interior decided to take land held in trust for the Mashpee Wampanoag Nation out of trust — effectively dissolving the reservation.  A bill to restore tribal land and sovereignty passed the House earlier this year but stalled in the Senate.

Organizers of the National Day of Mourning also use the occasion to organize politically, this year working for bills in the Massachusetts legislature  make a statewide Indigenous Peoples Day, Prohibit the use of Native sports team names and Mascots, Redesign the State Flag & Seal, Support Native Education, and Protect Native Heritage.

Participants also spoke out about the crisis of missing and murdered indigenous women, as well as government crackdowns on mostly-indigenous migrants from Latin America, and the detentions of children.  People from tribes in New York, Louisiana, Canada, and Mexico spoke out against pipelines, dams, and hydropower stations.

Broader still is the vision of The Red Nation and the Red Deal.

Red Nation was formed in 2014 “to address the marginalization and invisibility of Indigenous struggles within mainstream social justice organizing, and to speak out and strategically fight against the ongoing destruction of Indigenous life and land.”

The Red Deal is, as they put it, “one-part visionary platform, one-part practical toolkit, ”  aiming

“to build ... movements that can halt climate change and prioritize Indigenous liberation. ... The Red Deal ... emphasizes grassroots movement building and draws from people-power to enact reform.... It is time to reclaim the life and destiny that has been stolen from us and rise up together to confront this challenge and build a world where all life can thrive.”

Check out their plan at  the red nation dot org.   It’s something to be thankful for.

Update Required To play the media you will need to either update your browser to a recent version or update your Flash plugin.
Download audio file
Topic tags:
Activism, Civil Rights/Human Rights, Environment/Climate, History, Government/Politics, Indigenous