Many Restless Concerns by Gayle Brandeis 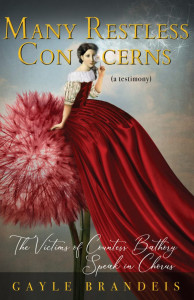 Countess Elizabeth Bathory, also known as The Blood Countess and Countess Dracula, was a noblewoman and serial killer in 16th Century Hungary. She was accused of torturing and killing hundreds of young women. The Countess avoided prison and execution due to her powerful connections, but spent the last four years of her life under house arrest in her own castle.

However, her victims, mostly servant girls, remained voiceless. That is until now, thanks to our in-studio guest Gayle Brandeis, who tells their stories in her new book Many Restless Concerns: The Victims of Countess Bathory Speak in Chorus (Black Lawrence Press).

In the words of Rene Denfeld, who will be in conversation with Gayle tonight at Powell’s: “Gayle Brandeis is a miracle. From the forgotten memories of murdered women, she’s created a monument of hope, pain, and demands for the justice of recognition. This is a startling, glorious, gorgeous book. Read this book and be transformed.”

Update Required To play the media you will need to either update your browser to a recent version or update your Flash plugin.
Download audio file
Topic tags:
Arts/Culture, Class, Fiction, History, Poetry, Women
Genre(s):
Arts and Culture