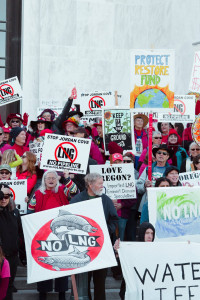 On February 19, the State of Oregon denied the coastal zone permit for Jordan Cove LNG! This is the THIRD critical state permit for which Jordan Cove LNG has failed to qualify. The Oregon Department of Land Conservation and Development (DLCD) said that Jordan Cove LNG would have significant impacts to the coastal communities, commercial and recreational fishing, the climate, shipping, and more. In DLCD’s denial, it also asserted that the Federal Energy Regulatory Commission (FERC) could not move Jordan Cove LNG forward without the Coastal Zone permit. As a result, the following morning the FERC commissioners voted 2-1 AGAINST approving Jordan Cove LNG. Commissioner Glick voted no because the project was not in the public interest, while Commissioner McNamee voted no because he needed more time to review permit denials from the State of Oregon, including last night’s Coastal Zone permit denial. FERC will likely revisit the vote on Jordan Cove LNG, though no date has been set.

On this episode of Locus Focus we look back at this epic week of Jordan Cove LNG permit denials with Allie Rosenbluth, community organizer with Rogue Climate in Southern Oregon.