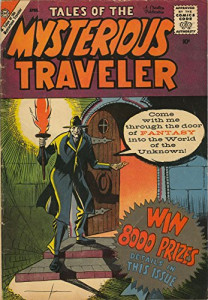 You're in for a treat on this special belated President’s Day edition of The Holy Crowley Hour. KBOO Radio luminaries S.W. Conser and Bill Dodge are guest hosting tonight, while regular host Ken Jones is quarantined at Crowley Cult headquarters in Beaverton, binge-watching reruns of the short-lived TV sitcom, “Hello, Larry”, starring McLean Stevenson. Just released on Blu-Ray by the Criterion Collection. All 35 episodes!

Conch and Bill will be playing comedy bits and radio theater for you, including an  episode of the old-time radio show The Mysterious Traveler. The series ran from December 1943 to September 1952, airing for most its run on the Mutual Radio Network, Sunday evenings at 7pm. The noirish episode, first broadcast on February 24, 1948, is titled "The Man Who Died Twice" and stars a very young Art Carney.

We're also expecting a visit from Eric Isaacson of Mississippi Records. Eric will be talking about the upcoming screening of the Psychic Sounds 10 Year Anniversary Showcase, coming up this Thursday, February 27th at Portland's Hollywood Theatre.

No better way to celebrate the holiday, and we're only a week late!

Update Required To play the media you will need to either update your browser to a recent version or update your Flash plugin.
Download audio file
Topic tags:
Arts/Culture, Film, History, Humor, Radio Theater
Genre(s):
Arts and Culture, Radio Theatre