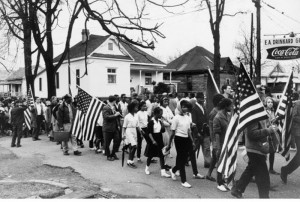 “Our democracy’s founding ideals were false when they were written. Black Americans fought to make it true." The essay traces 400 years of Black history in the territory now the United States. It demonstrates that Black struggle for liberty and democracy had crucial and highly positive impact on the development of the U.S. political system, greatly democratizing this country, though always furiously opposed by conservative interests. And that there's a long way to go to build a society that lives up to its ideals, especially for the Black American who led the struggle. The essay was published as part of the New York Times Magazine 1619 Project.

Update Required To play the media you will need to either update your browser to a recent version or update your Flash plugin.
Download audio file
Topic tags:
Activism, African American, Civil Liberties, Government/Politics, History