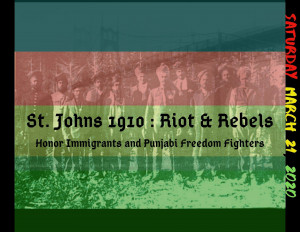 In 1910, St. Johns was home to an ugly ethnic riot and the seeds of a radical Indian independence movement. On the night of March 21, 1910 St. Johns erupted in anti-Indian violence perpetrated by a crowd of two hundred, including many white laborers, a St. Johns Review reporter, the town’s mayor, the police chief, and two police officers. Collectively, they attempted to terrorize and violently expel the 200-some Indians living in bunkhouses at the outskirts of town – and a few in downtown apartments – and working at the Monarch Lumber Mill and St. Johns Lumber Co. Ethnically motivated violence was common in these times. 1910 St. Johns appeared an unsettling repeat of the 1907 riots that rocked towns from California to British Columbia. In their wake, government entities refused to prosecute and punish perpetrators and, instead, enacted proscriptions against the mobs’ victims. Given this experience, Indians were not inclined to suffer another attack without a fight. In 1910, they resisted on the night of the riot and broadened and sustained their resistance over the next two years. Individuals armed, declaring “we have no protection.” As a community, they demanded prosecution of the rioters and were backed by the Multnomah County District Attorney Office and the British Consulate – not out of a sense of equality but to ensure a workforce and prevent anti-British unrest. Indians waged a media campaign and won allies to their cause. Most significantly, after the St. Johns riot and protracted legal battle, they became a center of anti-colonial organizing. That organizing culminated in the formation of Ghadar – a radical anti-British movement of laborers and intellectuals, Sikhs, Hindus and Muslims – in Astoria Oregon in the late spring of 1913.