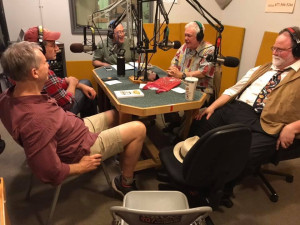 The Holy Crowley Hour has been a beacon of enlightenment, entertainment, and laughs for a generation, a relatively brief generation. We started the show back in September 2014, as a fill-in for a few late-night deejays at KBOO who were handed temporary suspensions for messing with the FCC. Since then, the show has become a staple of KBOO’s late-night block of radio theater, audio storytelling, and other assorted hijinks.

It’s been a long and productive run. However, even Passover matzoh has an expiration date. Twinkies do not, but that’s a rare exception.

The cult behind The Holy Crowley Hour, under the leadership of Carl Crowley, is pulling up stakes, well, actually frying up steaks, and heading for unknown worlds where the coronavirus is but a distant memory. Truth is, they were asked to vacate their headquarters in Beaverton. So this will be the very last episode. Given the current edict to shelter in place, the KBOO studios are off limits to all but a few staff members who are keeping things running. And they’re doing an amazing job! So rather than air a new episode, we’ve chosen to replay one of our very favorite Holy Crowley Hour shows.

As a host of several KBOO shows, I’ve interviewed authors, publishers, podcasters, actors, musicians, comedians, sex counselors, psychologists, hypnotherapists, entrepreneurs, politicians, activists, even the Yule log one memorable Christmas eve. And people often ask me, “Can you please move your shopping cart?” I get that a lot. But I’m also asked, “Who was your favorite guest?”

I’ve enjoyed each and every person I’ve talked with on the radio, and especially the guests we’ve had on The Holy Crowley Hour. But two stand out in my memory – David Ossman and Philip Proctor, the surviving members of the comedy group The Firesign Theatre. While growing up in Los Angeles, I listened to the Firesigns, both on radio and on record, and that inspired me to go into radio and radio theater. At least now you know who to blame.

I was able to get both David and Phil on the special Halloween edition of the show in October 2018. Phil was in Portland to appear in Fake Radio’s production of War of the Worlds, a live on-stage radio theater performance, celebrating the 80th anniversary of Orson Welles’ historic broadcast. And David joined us by phone from his home somewhere off the coast of Washington state. We were also fortunate to have, live with us in the KBOO studios, David Koff, artistic director of Fake Radio; Sam Mowry, artistic director of Willamette Radio Workshop; and, screenwriter and actor Jonathan Stark.

Hope you enjoy the show, while you’re sheltering in place. And I hope you’re all staying safe and healthy! Though The Holy Crowley Hour might be defunct, I’ll still be coming to you every fourth Friday of the month, from 11am to noon, on Mr. Jones’s Neighborhood. We’ve got a brand-new episode coming up this Friday, March 27th. It’s the perfect activity for people who are stuck at home with nothing else to do.