Race, the Military and the Police 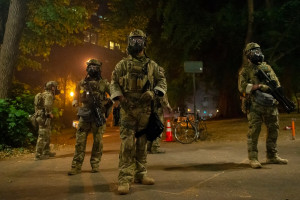 Bill Resnick interviews David Cortright, warrior for peace, writer and Vietnam War veteran. David wrote the classic book Soldiers in Revolt on the organizing and achievements of the GI anti-war movement. They discuss Trump’s ordering the U.S. military into U.S. cities including Portland to "dominate the streets" and clear out the George Floyd insurgency demonstrators that he described as looters vandals and terrorists.