Drones over the Willamette 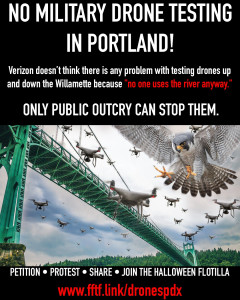 Verizon is planning to build a drone testing facility along the Willamette River in North Portland. Until recently few people knew about this plan and it seems that Verizon hoped to get the project approved away from the public eye. However neighborhood activists got wind of these plans and are now fighting back.

On this episode of Locus Focus we talk with Lia Holland with Fight for the Future, and Matt Stein with Green Anchors about why they think this drone testing facility is not only inappropriate but a harmful addition to the neighborhood.

Lia Holland is a Portland native and activist with Fight for the Future, a non-profit organization whose mission is to ensure that the web continues to hold freedom of expression and creativity at its core. They have been involved in getting communities like Portland to adopt strict facial recognition bans and are supporting Lia in her fight to stop Verizon's drone testing facility in North Portland.

Matt Stein lives at and works with Green Anchors PDX, a 7 acre eco-industrial park with green and creative tendencies, situated on the north shore of the Willamette River, just downstream of the St Johns Bridge. A remediated WWII shipyard, this beautiful site is home to many small businesses and artists who work out of temporary structures to sit lightly on the land.

For more information on what you can do to stop the drone testing facility click here.

Update Required To play the media you will need to either update your browser to a recent version or update your Flash plugin.
Download audio file
Topic tags:
Activism, COVID19, Community Building, Energy/Natural Resources, Environment/Climate, Indigenous

END_OF_DOCUMENT_TOKEN_TO_BE_REPLACED

View the video of the 2020 Annual Meeting of the KBOO Membership which was held online Nov. 7, 2020. You can also see the election results for KBOO's Board of Directors.