Hear and There: Audio Postcards from Earth 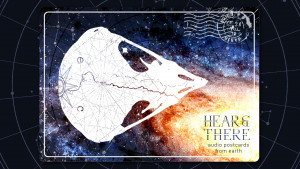 In honor of KBOO's 50th Anniversary and the 20th Anniversary of A Different Nature's 24-Hour Earth Day Broadcast, we are inviting you to join us at the OMSI Kendall Planetarium for Hear and There:  Audio Postcards from Earth Tuesday October 9th at 7:30 PM.

This is an all ages and ability inclusive event that features 5.1 surround sound installations of some of the locations featured on Threshold Shift along with the broadcast remixes created by Richard Francis, creator of A Different Nature. You'll be able to stargaze from those locations at the time the recordings took place. Tickets are still available and selling fast! There will be an open question and answer period with some of the scientists, artists and engineers for you to be able to ask your sound and light questions about the earth, the night sky and what we can all do to preserve it for future generations.

Meet the Collaborators!
The Mastermind/Organizer: Nikki Martin is an award-winning sound artist, storyteller, and production professional who specializes in environmental sound design and foley for theater, found space, outdoor festivals, and non-profits arts organizations. Her great passions are nature, education, and providing community and venue spaces where less-heard voices take center stage. A recent foray into radio created the Threshold Shift project for KBOO Community Radio's 2017 Artist Residency. Those efforts led directly developing Hear and There: Audio Postcards from Earth. She freelances with the Smithsonian Institution, the National Council for the Traditional Arts, Wit's End Puppets, Bread and Puppet Theater and the National Endowment for the Arts along with many independent artists and regional production companies. Nikki is also happy to skill share and create teaching opportunities for everyone from kids to college students to professional artists about sound and production.

The Guru/Collaborator: Bill McQuay of Eco Location Sound is a career veteran in field recording and sound production. He is a long-time NPR contributor, independent audio producer, and his work has received numerous national recognitions including a National Academy of Sciences Award and a Grammy. Before launching his current project, Bill was Supervising Audio Engineer for the Library of Natural Sound at the Cornell Lab of Ornithology and a producer for their multi-media group. Prior to that he was an audio engineer and technical director for NPR programs including: Morning Edition, Weekend Saturday and Sunday, Performance Today and Radio Expeditions. Nikki and Bill met at Cornell University's Field Recording Workshop in the Sierra Nevadas in 2016 and, after enjoying working on the KBOO Threshold Shift project, we decided to team up and try something a bit more immersive. We are hoping Hear and There leads to many more collaborations in the future.

The Oregon Museum of Science and Industry had it's beginnings at City Hall and then moved temporarily to businessman Ralph Lloyd's house where it boasted the first planetarium in the Northwest. OMSI is now one of the top science centers in the nation encouraging “education transformation through the intersection of science, technology and design.” It serves over one million visitors every year at the museum and through off-site programming and is a leader in partnering with local artists and scientists to provide new, innovative ways of engaging with the world we live in. Known for their sell-out monthly After Dark Series as well as hosting and providing support for the Portland Winter Lights Festival, we are so glad that they decided to collaborate with us on this project to support a greater awareness surrounding the importance of dark skies and natural sound.

KBOO Community Radio is a volunteer run and led non-profit, independent radio station serving the wider Portland, Oregon community since 1968. They provide education and training for interested community members in radio journalism, radio production, audio archiving, sound engineering and more. With a commitment to inclusivity and accountability, KBOO has cemented its position in the Portland media landscape as the place to hear incredibly dynamic, diverse, and in-depth programming surrounding everything from the local arts scene to often overlooked social justice issues. They have a long history of environmental advocacy coupled with experimental, avant garde radio so we're continuing to celebrate their 50th as part of Hear and There: Audio Postcards from Earth.

Dr. Jacob Job is a research associate and natural sounds recordist with the Sound and Light Ecology Team at Colorado State University and the Natural Sounds and Night Skies Division of the National Park Service. He travels to national parks around the country to capture the natural sounds of animals and soundscapes to be used in education and outreach efforts in the form of audio postcards, online sound libraries, story maps, and short films. You can find more of his work on his Soundcloud at www.soundcloud.com/gaviaimmer

Ben Mirin is a sound artist, acoustic biologist, and National Geographic Explorer. He is the creator and host of the TV show Wild Beats! on National Geographic Kids and Nat Geo Wild, and recently created BeastBox, an interactive, online wildlife music-making game, in collaboration with Cornell University's Lab of Ornithology. He is a fellow at the Safina Center and the Explorers Club in New York. Photo Credit: Drew Fulton Photography

Dwight Porter is the Portland-based owner and founder of Varied Hush Records, a label dedicated to documenting, preserving, and presenting soundscapes of natural quiet. He seeks to capture areas as free from human-made noise as possible, which is getting more difficult with every passing year due to our ever-increasing demands on the environment and the profliferation of machinery into areas that were formerly wilderness. He spent six years collecting recordings at the Malheur National Wildlife Refuge in Southeastern Oregon creating not only a beautiful collection of soundscapes but also an important and much needed audio baseline that can be used to monitor the area for ecological changes.

Laurel Symes is a Neukom Fellow at Dartmouth College with a joint appointment in Psychological and Brain Science and Biology. She collaborates with other researchers to study decision-making and how it intersects with behavior, biology, neurology, and mathematical modeling. She has been working extensively with Bill McQuay to develop creative avenues for the public to access her teams' research and interact with it in their own lives. This often requires climbing into the tops of forest canopies to install recorders that will capture the vocalizations of the species she works with and getting to hang out with lots and lots of awesome bugs.

Hannah ter Hofstede  is an Assistant Professor of Biological Sciences at Dartmouth College. She researches extensively in the field of sensory ecology, which studies how our senses evolved to understand and interact with our environment, especially as it pertains to survival and reproduction. This research requires an interdisciplinary approach that crosses into physiology, behavioral studies, ecology, and phylogenetic, or evolutionary, relationships. Most of her work focuses on the bats and katydids that spawned Threshold Shift's most popular episode. She also gets to hang out in the rain forest with Laurel climbing trees and spending one-on-one time with some phenomenal bugs.

A Different Nature Collective—The radio show A Different Nature, airing Monday nights from 8 to 10 PM on KBOO 90.7 FM, was started by Richard Francis in 1980. It still holds a valuable and unique place in the Portland radio scene; no other show features such a wide range of experimental and avant garde music and sound, including the award-winnning 1998 Earth Day show, a 24-hour broadcast of only the sounds of nature: no man-made noises, no interruptions of human voices, not even top of the hour station ID’s. The A Different Nature Collective formed by some of his collaborators after his passing in 2009 continues his vision, focusing on genre-defying music and audio art, historical, contemporary and emerging. It is a space for exploring the depths and outer limits of our sonic awareness. The subjects vary widely, but the inquisitive spirit and attentive listening remain. Threshold Shift is honored to be walking in their footsteps, 20 years after that Earth Day broadcast. Hats off to the radio wayfarers, and here’s to another 50 years of KBOO!