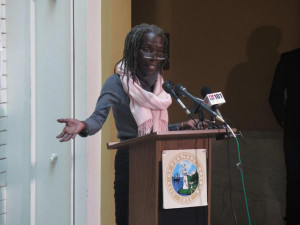 Responders will be trained in behavioral health related crisis intervention and first aid.

They will respond to 911 calls related to behavioral health crises or people experiencing houselessness that do not require police, fire or ambulance services.

At the press conference, Commissioner Hardesty announced the plan for a pilot program in coordination with Portland State University.

Darren Golden with the Urban League of Portland also expressed the group’s support for the program. He noted that the program has the capacity to better protect black Portlanders and rebuild trust, in a way that interactions with police do not.

Kaia Sand is the Executive Director of Street Roots, someone who Commissioner Hardesty credited as instrumental in creating the pilot program. She spoke with KBOO’s SJ Oxendine to explain in more detail how the pilot program will work.

On Thursday, November 21st, the City Council will hear and discuss the recommendations for Portland Street Response logistics and implementation.

Clip 2: Darren Golden with the Urban League of Portland