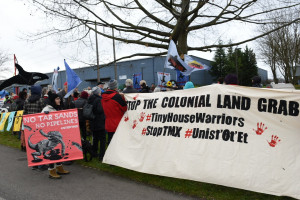 The Trans Mountain Pipeline Expansion would transport tar sands oil across Canada, from the Alberta Tar Sands to the shores of British Columbia, which activists oppose for a few reasons. For one, the emissions from such a project would be severe, and the pipeline would cross considerable amounts of indigenous land, creating risk for their local waters and way of life.

Protesters are demanding the resignation of the CEO of the Port of Vancouver for their role in the shipment and storage of pieces of the project.

Rachel Walsh  0:00
My name is Rachel Walsh and I organize with Portland Rising Tide. We're a grassroots group and we're part of an international network of Rising Tide groups.

Althea Billings  0:10
And tell me- tell me about the protest that was going on today.

Rachel Walsh  0:15
Yeah, so, today, Portland Rising Tide along with a coalition of grassroots organizations, and community members went out to the port of Vancouver, Washington, and we delivered a resignation letter for Port CEO Juliana Marler to sign because she has failed us in terms of leadership on climate and human rights by allowing pipe for the Trans Mountain Expansion Tar Sands Pipeline to be shipped through the Port of Vancouver. This is the third action that Portland Rising Tide and other groups has done at the Port in recent months. In October, we actually went out and blocked the pipe shipment at the pipe by rail aand then we went back to November, and we blocked it on the water, we actually went out with about 20 kayakers. And we also had climbers climb on the port, and we blocked the tanker ship Patagonia that was delivering the pipe from India to the Port of Vancouver. So we blocked it twice. And this time, we brought a bunch of community members out, we had about 150 community members join us today. And we went to confront the Port Commission office directly and demand the resignation of the CEO. And even though it's public port, they wouldn't even let us come inside and set their security out to block us from entering. But we delivered our message loud and clear that we need stronger leadership on climate and for human rights.

Althea Billings  1:51
And so tell me has the port committed to any kind of action on this pipeline in particular?

Rachel Walsh  2:00
So, recently the Port has put out statements saying that they're in favor of renewable energy and climate solutions. They said that they were the leader on climate, and they have agreed to not build new fossil fuel terminals at the port. But they haven't made any statements about not allowing infrastructure for fossil fuel expansion or tar sands, which is the dirtiest fossil fuel extraction that exists today. They haven't made made any commitments to stopping this distructive infrastructure from moving through the port. So we, as a community are saying that's not enough. We can't just have business as usual. We need stronger leadership. And we're putting pressure on them to take a bolder stance in support of a livable kind of future and for indigenous sovereignty and human rights.

Althea Billings  2:58
And what would be the consequence if the Trans Mountain Pipeline Expansion project were to go forward?

Rachel Walsh  3:05
Right, so there are a number of destructive consequences. If the Trans Mountain Pipeline Expansion tar sands pipeline is built, a big issue is that it's a violation of indigenous sovereignty. And actually, on Tuesday of this week, the Canadian federal court of appeals actually issued a ruling against native tribes that sued, stating that they did not get adequately consulted before the Canadian government approved the pipeline project. And so they actually lost that lawsuit on Tuesday, the Canadian court ruled against the indigenous tribes. However, there's still a lawsuit pending in the Supreme Court of Canada. They are most likely going to continue on with the lawsuit that they will lost on Tuesday in the Supreme Court as well. And leaders from these tribal groups which include the Tsleil-Waututh, the Squamish, and the Coldwater bands have all pledged that they will take direct action and engage in civil disobedience, if needed in order to stop the pipeline project. So, today we sent a strong message to the Port of Vancouver, USA, that we need stronger climate leadership. We need stronger leadership on human rights. And we are going to be back. We're going to continue fighting the TMX pipe as it moves up to Canada and up in Canada, there are a lot of frontline groups who are going to continue opposing this project. We want to send a strong message that this fight isn't over and that people all up and down the coast, the  Pacific Northwest are going to keep fighting it and there are a lot of ways to get involved in supporting these fights, you can donate to Pull Together, which is a coalition of indigenous groups that are fighting this project in the courts. You can also donate to the Unist'ot'en, and the Wet'suwet'en you can donate to Unist'ot'en camp, and that would support their efforts in preventing the Coastal Gaslink pipeline from moving to their territory. You can get in touch locally with Portland Rising Tide, or a number of climate groups if you want to get involved.

Althea Billings  5:30
Very cool. Well, thank you for speaking with me, Rachel.